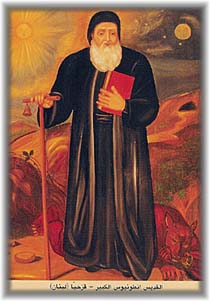 St Anthony the Great is believed to have lived for 105 years, from 251 to 356, dying on 17 January, the day when we celebrate his feast. He was born in ancient Egypt, while the pagan religion was shrinking but still alive there, although by the time of his death it, too, was about to expire. His parents were Christian, and wealthy. He was a religious and contemplative child. At the age of 18 he was orphaned, and so probably became wealthy. But at church he heard a voice saying: ““If you want to be perfect, go, sell what you have and give to the poor, and you will have treasure in heaven; and come, follow Me.” (Matthew 19:21) He did just that, donating all he had to the poor, and pacing his sole sister with some good women.

Although he had a teacher in the solitary life, he went to live in a graveyard outside the village (which is where all graveyards were at that time). He survived on bread and water, and often stayed inside a tomb, so that he could remain alone. He was plagued with temptations by the Evil One, who would appear to him, sometimes in human form, sometimes in bestial form, or as a monster. According to St Athanasius, whose biography, written only a few years after his death, is our best source for him, St Anthony realised that the form the devil took was related to his own interior state. That is, the devil was tempting him where he was weakest.

It is said that in about 285, when he was almost 35 years old, he was so affected by the crowds of people who came to see him, that he went to live in an old fort or castle on the Nile River. There he remained for twenty years, living as a hermit, until he had obtained mastery of his thoughts, desires, and emotions. There is a very great truth here: a person who can force themselves to live alone can in fact build up a tremendous power inside, because they have to overcome the desire to be with others and to see the rest of the world, endless times each day. However, he did have pupils: people who were attracted by his reputation for holiness and impressed by his austerity took up residence near but not with him. Again, this is true: a person comes to a certain stage of spiritual development and then they must teach others if they are to progress, after all, there are things one can see in others but not, at first in oneself. But once we have seen them outside, we can see them inside.

In 311, he learnt that the Christians were being persecuted in Alexandria, and he decided to go there himself and to encourage them to stand fast. He would have been 60 years of age. This persecution, part of the Diocletian, was so vehement that it is said 660 Christians were killed there in the eight years up to 311. The fact that the persecution in Alexandria went on for that length of time before St Anthony went to their help tells us that the sort of communication he had with others was probably entirely spiritual. He was such a commanding figure that, in Alexandria, he was not himself attacked.

When this was over, he retired to a spot on the Red Sea, called Mount Colzim, where he had a cave, water, and some palm trees. He grew wheat, and if people brought him anything, he gave them one of the baskets he was weaving to keep himself usefully occupied. Here he obtained great fame as the organizer of spiritual life and solitary discipline: even if the solitaries lived near each other in order to render mutual support. At about the age of 85, in 335, he went to Alexandria at the request of St Athanasius to preach against the Arian heresy. However, he returned to his cell, for, he said, a monk out of his cell is like a fish out of water. As he grew older, he needed to be cared for, and two monks helped him. He ordered that his place of burial be kept secret so that there be no cult over him.

While his place of rest has never been found, he has been the centre of devotion for his extraordinary victories in the spiritual life, and the teaching and example he gave to others. He is greatly honoured among Maronite monks for his contribution to monasticism, and hence is honoured by all Maronites.

At the monastery of St Anthony, Qozhaya, named after him, they have this extraordinary painting . In one picture, we see the whole of the spiritual life and how to live it. First, we see the saint himself. He is looking down in humility, but he is not stooped – he is upright in Christ, and unembarrassed. He is elderly, and walks with the aid of the “tau” walking stick – the “tau” or capital T was how they depicted the Cross on which Our Lord was crucified.

The picture is read from our left to the right: to our left (his right) is the cave in which he lived and from which the beast has come. This represents the sinful impulses inside us. But he leant on the power of God, represented by the tau waking stick, and so the creature is tamed and lies quietly at his feet. The bell on the staff is used to call the beast to be quiet (it is sometimes said to be a pig, but here it is clearly a monster). This is very profound: our memory of our sins never disappears, but the sinful impulse is tamed, and if it rises up, a little ring on the bell, and it takes its proper place.

Both the sun and the moon are in the sky and shining because he is no longer in earthly time when it can only be day or night. He is beyond life and death, he is in eternity. The final detail to remark on is the book. He may have been illiterate, which means that God’s universe and the laws He writes on our hearts were St Anthony’s book. He has the book but he does not need it: he reads without looking at a word, because he reads with the eyes of faith.

May his prayers always be with us.