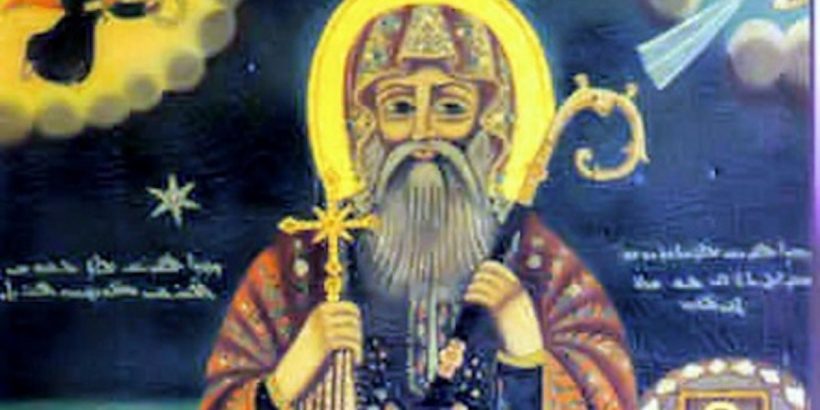 Jacob of Sarug on The Creation of Adam and the Resurrection of the Dead, trans. and introduced, Edward G. Mathews Jr. Gorgias Press

This memra by St Jacob of Sarug has a significant background in meditation on God, creation, and Adam and Eve, but for our purposes, I think the heart is the passage from lines 315-375. Jacob is speaking about the inevitability of death. Death, as he explains it, is a dissolution: the elements which were united in an organic whole are now broken up. This death affects both each individual person and the world, or, as he says “Just like [man] the microcosm, He will dissolve the entire world, for the world and man are two worlds to the understanding” (315-316). wayK dalnošo z.3ouro šro l.3ol.mo Kouleh, d.3olmo wanošo t.reyn noun 3olme lad.mes.ta.kal.

In other words, humanity is part of the universe, but while they are both understandable (at least to some degree), they are understood differently. Then he comes to the point he wished to make: “The dissolution of the world truly resembles a human death, and that death is a dissolution as well as an end” (317-318) It means also that the death of a person is like the death of a world. He develops this thought over the next verses.

St Jacob also has, in this section which I consider central, “Your beloved is dead and his death has become like a teacher to you about how the entire world passes away from its beloved” (321-322). A little later he says: “A man dies and becomes a teacher to his companions, just as the beauty of the world fades when it reaches its end” (331-332). To his companions, surely, because they have the affection to learn from it. A life does not teach its whole lesson until its completion.

The fact that we will die should have a bearing on how we live the whole of our lives. This is the first part of the message. The second part is that as death came through sin, so too life comes through goodness and virtue. The remarkable thing is that we never learn either half of this great truth: first, we waste our time as if it is unlimited. Second, we do not live for eternal life, but rather, through our sin, we allow death to enter into the life we have.

This is the lesson in St Jacob’s words:

Consider, O soul, the renewal that fire can bring about,

and renew yourself before the flame overcomes you.

In the delightful waters of repentance restore your person …

With the flowing of gentle tears heal your abscesses,

for they heal there in the flame – tremble before the fire.

If the pain makes you tremble, then bandage it with repentance,

before the sea of fire roars and the world trembles.

Lo, a dead one has become a mirror for you, O discerning one,

look upon him and see that the world and its adornments pass away.

Reform yourself by it and repent from evil deeds,

… Give glory to that hidden power by which are joined

From this we can deduce that goodness, the power and grace of God, is a uniting power, and hence it is the force which upholds life. We have a single word which we use for this power: “love.” The power of the love of God is such that if we saw even a little of its true immensity and power, we would tremble with awe, and yet, it is the energetic power within which we exist. We do not need to try and grasp this philosophically, all we need to do is to try and live it – and we can do that by following the commandments of God, by striving for holiness.

In speaking about the Fall of Adam and Eve, Jacob says: “The serpent snatched away the garment of light in which they were clothed, and … they stood there naked” (185-186). This is an allusion to the ancient Semitic teaching that, in the Garden of Eden, Adam and Eve were clothed with light, and when they sinned, they lost that robe of glory. St Jacob then follows that with an equivalent image: “The image that the Divinity had painted went down to destruction” (189). We refer to the distortion of the image of God often in our liturgy. It is based on Genesis 1:26: “Then God said, “Let Us make man in Our image, according to Our likeness …” This is a fundamental text for Syriac spirituality.

It is the cause of the Incarnation: “Because of the great fall of this great image, the Son of the King went down to restore His image that had become corrupted” (193-194). Now this also ties in with the distinctive Syriac theology of typology, and it shows how typology is far more than simply finding Old Testament prefigurations of the New Testament. Typology provides the key to the whole of salvation history: the authenticity and integrity of the image of God in Man had to be maintained because by its rupture and disfiguring it threatened the entirety of the cosmic unity.

If one takes that together with the passages I set out at the start of this brief review, it becomes obvious that this cosmic unity was a feature of life and the disunity an aspect of death. Jacob returns to this further on:

He will come at the end to accomplish everything in spiritual fashion,

and He will raise up His image from its fall so that it will never fall again.

He will come to complete the course of time and of cycles,

At the end of time, there will be no more death, because death is a function of dissolution in time, but there will be time no longer. Time, which has one great cycle (all of cosmic time) and many smaller cycles (days, years, and months) will be completed because the restoration of the image of God, a work which could only be done in time, will be completed.

This is a work of great wisdom and depth.