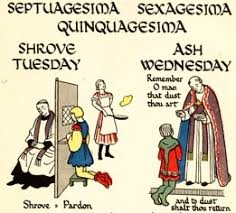 Introit   The sorrows of death surrounded me, the sorrows of hell encompassed me: and in my affliction I called upon the Lord, and He heard my voice from His holy temple. Psalm. I will love Thee, O Lord, my strength: the Lord is my ﬁrmament, my refuge, and my deliverer. ℣. Glory be to the Father …The sorrows of death …

Collect   Graciously hear, we beseech Thee, O Lord, the prayers of Thy people, that we, who are justly afflicted for our sins, may for the glory of Thy Name be mercifully delivered.

Epistle Brethren: Know you not that they that run in the race, all run indeed, but one receives the prize? So run that you may obtain. And every one that strives for the mastery refrains himself from all things: and they indeed that they may receive a corruptible crown;  but we an incorruptible one. I therefore so run, not as at an uncertainty; I so ﬁght, not as one beating the air: but I chastise my body, and bring it into subjection: lest perhaps when I have preached to others, I myself should become a castaway. For I would not have you ignorant, brethren, that our fathers were all under the cloud, and all passed through the sea, and all in Moses were baptized, in the cloud and in the sea: and did all eat the same spiritual food, and drank the same spiritual drink: (and they drank of the spiritual rock that followed them, and the rock was Christ.) But with most of them God was not well pleased.

Gradual   A helper in due time in tribulation: let them trust in You who know You: for You hast not forsaken them that seek You, O Lord. For the poor man shall not be forgotten to the end: the patience of the poor shall not perish for ever: arise, O Lord, let not man prevail.

Tract   Out of the depths I have cried to Thee, O Lord: Lord, hear my voice. Let Thine ears be attentive to the prayer of Thy servant. If Thou, O Lord, wilt mark iniquities: Lord, who shall stand it? For with Thee there is merciful forgiveness, and by reason of Thy law, I have waited for Thee, O Lord

Gospel (Matthew 20:1-16) At that time Jesus spoke to His disciples, this parable: “The kingdom of heaven is like to an householder who went out early in the morning to hire labourers into his vineyard. And having agreed with the labourers for a penny a day, he sent them into his vineyard. And going out about the third hour, he saw others standing in the market place idle, and he said to them: Go you also into my vineyard, and I will give you what shall be just. And they went their way. And again he went out about the sixth and ninth hour: and did in like manner. But about the eleventh hour he went out and found others standing, and he said to them: Why stand you here all the day idle? They say to him: Because no man hath hired us. He said to them: Go you also into my vineyard. And when evening was come, the lord of the vineyard said to his steward: Call the labourers and pay them their hire, beginning from the last even to the ﬁrst.”

“When therefore they were come, that came about the eleventh hour, they received every man a penny. But when the ﬁrst also came, they thought that they should receive more: and they also received every man a penny. And receiving it they murmured against the master of the house, saying: “These last have worked but one hour, and thou hast made them equal to us, that have borne the burden of the day and the heats. But he answering said to one of them: Friend, I do thee no wrong: didst thou not agree with me for a penny? Take what is thine and go thy way: I will also give to this last even as to thee. Or, is it not lawful for me to do what I will? Is thine eye evil, because I am good? So shall the last be ﬁrst, and the ﬁrst last. For many are called, but few chosen.”

Offertory   It is good to give praise to the Lord, and to sing to Thy Name, O Most High.

Secret  Receive our offerings and prayers, we beseech Thee, O Lord, and by these heavenly Mysteries both cleanse us and graciously hear us. Through our Lord …

Communion Make Thy face to shine upon Thy servant, and save me in Thy mercy: let me not be confounded O Lord, for I have called upon Thee.

Postcommunion May Thy faithful people, O God, be strengthened by Thy gifts; that in receiving them, they may seek after them the more, and in seeking them, may receive them for ever. Through our Lord Jesus Christ…

The Preparation for Lent

The three Sundays preceding Ash Wednesday are called Septuagesima, Sexagesima and Quinquagesima Sundays, which mean, respectively, the “seventieth,” “sixtieth,” and “ﬁftieth” day, i.e. before Easter. They correspond with the name of Lent (Quadragesima in Latin: “fortieth”). They are not lieterally 70, 60, and 50 days. On these Sundays the Gloria and Allelúia are omitted, except when the Mass of a feast is said. Purple vestments are used in preparation for Lent.

The Catholic Culture page, Library : Shrove Tuesday and Shrovetide | Catholic Culture, says: “Shrove Tuesday is the last day of what traditionally was called “Shrovetide,” the week preceding the beginning of Lent. … While this was seen as the last chance for merriment, and, unfortunately in some places, has resulted in excessive pleasure, Shrovetide was the time to cast off things of the flesh and to prepare spiritually for Lent. Actually, the English term provides the best meaning for this period. “To shrive” meant to hear confessions. In the Anglo-Saxon “Ecclesiastical Institutes,” recorded by Theodulphus and translated by Abbot Aelfric about AD 1000, Shrovetide was described as follows: “In the week immediately before Lent everyone shall go to his confessor and confess his deeds and the confessor shall so shrive him as he then may hear by his deeds what he is to do in the way of penance.” To highlight the point and motivate the people, special plays or masques were performed which portrayed the passion of our Lord or final judgment. Clearly, this Shrovetide preparation for Lent included the confessing of sin and the reception of absolution; as such, Lent then would become a time for penance and renewal of faith.”

“…this week of Shrovetide condoned the partaking of pleasures from which a person would abstain during Lent, (and) had a special significance in England. Pancakes were prepared and enjoyed, because in so doing a family depleted their eggs, milk, butter, and fat which were part of the Lenten fast. … Pope St. Gregory (d. 604), writing to St. Augustine of Canterbury, issued the following rule: “We abstain from flesh, meat, and from all things that come from flesh, as milk, cheese, and eggs.” These were the fasting rules governing the Church in England; hence, the eating of pancakes on Shrove Tuesday. … for this same reason, Easter was celebrated with decorated eggs and fresh breads. .. the Easter egg … symbolized the resurrection: just as a little chick pecks its way out from the egg shell to emerge to new life, so Christ emerged from the tomb to new and everlasting life.”