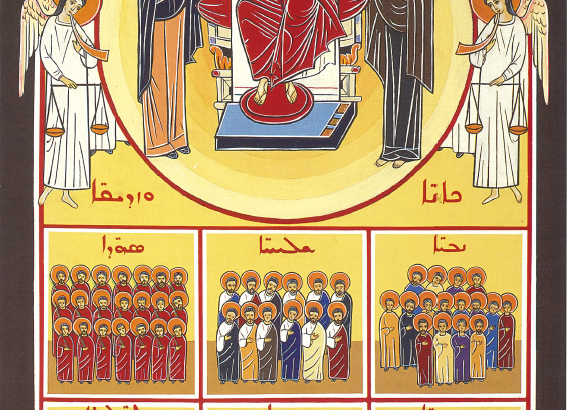 Once more, I am profoundly impressed by how much detail, and how much thought has gone into this icon. Fr Badwi states of it: “The Righteous and the Just are the children of the glorious Church who preceded us to the Kingdom with the same eschatological scene that was seen in the previous icon of the Deceased Priests. They are an elite group from among the multitude of the ones whose names are known are unknown. The Prophets, Apostles, Martyrs, Confessors, Monks, and Virgins, stand praising and glorifying the One who is the beginning and the end.”

It is reminiscent of the masses of detail found in some Russian icons, but far more well-organised. It provides the feeling of fullness, without any sense of clutter. Even more clearly than the Commemoration of Deceased Priests, this icon reminds us of the fact that we will all die and be judged. The companies of the saints are presented, differentiated by appropriate colours: the martyrs in red, the monks in blanks, the virgins and the celibate in white, and the others in various colours.

The enthroned Lord is in the middle, addressed as we saw last week, by Our Lady and St John the Baptist, who are pleading for humanity. They are inside the inner circle. About the central gem, are the angels; once more, the angels announcing the end of time, and the coming judgment. Beneath them are the righteous and the just, because, holy as they are, yet their holiness does not approach that of the others. They are represented separately, one from the other, because the ancient texts speak of the saved as being organised in choirs: there is nothing but order in heaven. It also means that their holiness and the road they travelled to heaven, is what distinguishes them now.

They are also arranged in choirs, because they are singing hymns of praise to God. Hence, the opening hymn of today’s liturgy, addressed to Our Lady, states: “… all the children of the Church will cry out with hymns of praise and join you in paradise … At the right hand of your Son the elect will sing his praise, and they will rejoice.”

Then, in the opening prayer, it says: “Holy Father, you reward the righteous and the just for their true faith and their profession of that faith. You clothe their bodies with glory and their souls with light.” According to the Syriac teaching, when Adam and Eve were in the Garden of Eden, they were surrounded by light. They were, to put it another way, clothed in glory. But when they sinned they lost the shining robe. That is how they knew that they were naked (Genesis 3:7, 10 and 11):because of the light about them they had not known what the actual surface of their bodies looked like. If you light a fire in a grate, you cannot see the base of the grate until the fire has died down.

This is why in baptism in the Syriac Church, the priest speaks about taking back up the garment of light which Adam had discarded. It is why he prays, in the same sacrament, that when the baptised person dies, Christ Himself will be the robe of light in which he will be taken into heaven. The glorious clothing which had once been ours is restored, but internally. Thus, in Matthew 22:11-12, the man who enters the marriage feast without a garment is thrown into the darkness. In terms of the Maronite teaching, one needs the garment of light to enter the wedding banquet of heaven, and without that light, we belong to the darkness.

It is appropriate that the Divine Liturgy of the day therefore has light imagery, e.g. in the Hoosoye, is said of the righteous and the just: “They were like lamps of knowledge and holiness, giving light to those who walk the path of life.” The importance of light as a spiritual theme can hardly be overstated: it is the theme of the first letter of St John, who taught that “God is light.” (see not only 1 John 1:5 but also the Gospel of St John 1:9).

What is so hard for us to recognise is darkness within ourselves. We dress it up and give it fine names. We speak about our pride as standing up for ourselves, or our selfishness and looking after ourselves. If we get angry with our children, we blame them – we say that they made us angry even though we can hardly be serious in expecting them to control themselves when we cannot do the same ourselves. I have to learn to recognise at once: this feeling in me is darkness. I need light. I need God. I may not always be able to see that what is within me is dark – after all, the darkness hides itself. But I can know that it is not light. My conscience will tell me that.

It is, perhaps, the voice of conscience which makes the saints and righteous what they are.