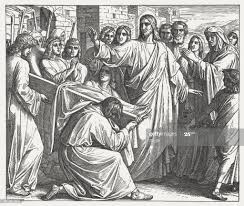 Introit   Behold God is my helper, and the Lord is the protector of my soul: turn back the evils upon mine enemies, and cut them off in Your truth, O Lord my protector. Save me, O God, by Your Name, and deliver me in Your strength. ℣. Glory be to the Father, and to the Son, and to the Holy Ghost… Behold …

Collect Graciously Let Your merciful ears, O Lord, be open to the prayers of Your suppliant people: and that you may grant their desire to those that seek; make them ask such things as please You. Through our Lord

Epistle (1 Corinthians 10) Brethren, let us not covet evil things, as they also coveted. Neither become idolaters, as some of them: as it is written: The people sat down to eat and drink, and rose up to play. Neither let us commit fornication, as some of them committed fornication, and there fell in one day three and twenty thousand. Neither let us tempt Christ, as some of them tempted and perished by the serpents. Neither murmur, as some of them murmured, and were destroyed by the destroyer. Now all these things happened to them in ﬁgure, and they are written for our correction, upon whom the ends of the world are come. Wherefore he that thinks himself to stand, let him take heed lest he fall. Let no temptation take hold on you, but such as is human: and God is faithful, who will not suffer you to be tempted above that which you are able; but will make also with temptation issue, that you may be able to bear it.

Gradual   O Lord, our Lord, how admirable is Your Name in the whole earth! For Your magniﬁcence is elevated above the heavens. Alleluia, alleluia. (Ps. 58:2.) Deliver me from my enemies, O my God: and defend me from them that rise up against me. Alleluia.

Gospel (Luke 19:41-47) At that time, when Jesus drew near to Jerusalem, seeing the city, He wept over it saying: “If you also had known, and that in this your day, the things that are to your peace: but now they are hidden from thine eyes. For the days shall come upon you, and thine enemies shall cast a trench about you, and compass you round, and straiten you on every side; and beat you ﬂat to the ground, and your children who are in you; and they shall not leave in you a stone upon a stone, because thou hast not known the  time  of  your  visitation.”  And  entering into the temple,  He began to cast out them that sold therein, and them that bought, saying to them: “It is written, My house is the house of prayer, but you have made it a den of thieves. And He was teaching daily in the temple.”

Offertory   The justices of the Lord are right, rejoicing hearts, and His judgments sweeter than honey and the honeycomb: for your servant keeps them.

Secret  Grant to us, we beseech You, O Lord, that we may worthily frequent these Mysteries: for as often as the memorial of this Victim is celebrated, the work of our Redemption is wrought. Through our Lord …

Communion He that eats My Flesh, and drinks My Blood, abides in Me, and I in him, says the Lord.

Postcommunion May the communion of Your Sacrament, we beseech You, O Lord, bring us cleansing and grant us unity. Through our Lord Jesus Christ …

A Sixth and Final Extract from Fr P. Joseph: “Healing the Family Tree”

This is the final extract from Fr Peter Joseph’s article “Healing the Family Tree,” at https://www.amicidilazzaro.it/index.php/healing-the-family-tree-new-age-under-the-guise-of-religion/

Another thing doing the rounds is a ritual for baptising aborted or miscarried babies (months or even years after the event), involving recital of a prayer and sprinkling Holy Water into the air. I have met people who have followed this ceremony in good faith. But I must say here that baptising miscarried babies is pure fantasy. Sacraments are for the living. No one can baptise the dead. That idea comes straight from the Mormons. Mormons try to baptise all their dead ancestors, back as far as one can go.

No one knows for sure what St Paul is referring to when he mentions Corinthians “baptising on behalf of the dead” (1 Cor 15:29) – but the Church’s teaching rules out any ceremony of baptism administered to those dead and buried. To attempt to do so is the illicit practice of simulating a sacrament. I have even seen a pamphlet saying that women worrying about miscarriages are impeding the happiness of their babies. Nonsense! Babies who die in the womb are in the hands of God. They are certainly not being detained from happiness because of their mothers’ worry. The author was probably unaware that he had implied in that pamphlet that such babies were suffering in Hell or Purgatory. Both are impossible here.

Another new age practice which has made its way into the Catholic Church is naming your guardian angel. I have heard some people speak of it as if it were a necessary thing to name your angel, and as if it were an age-old practice. It is in fact a new age fad, never practised or taught by a single Pope or Saint or any notable writer in the whole history of the Church. The Directory on Popular Piety and the Liturgy issued in 2002 by the Vatican’s Congregation for Divine Worship says, “The practice of assigning names to the holy angels should be discouraged except in the cases of Gabriel, Raphael and Michael whose names are contained in Holy Scripture” (no. 217).

Behind it is a desire to tame and control the spirit world. It is disordered to name your angel: the higher names the lower, not the other way around. Parents name their children, not vice versa. We are entrusted to our guardian angels; they are not entrusted to us. I fear that some people, in their mind, have turned their angel into some human friend or pet.

In all these matters, there is no better advice than that of St Paul in 2 Thess 2:15: “stand firm and hold to the traditions which you were taught by us”. Neither subtract from nor add to the teaching of the Church. Many novelties are really the re-appearance of ancient gnostic errors parading as piety, for as St Paul also warns (2 Cor 11:14), “even Satan disguises himself as an angel of light”.