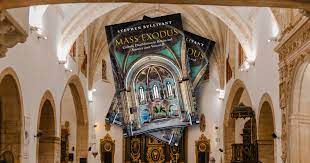 Having given an overall picture of Bullivant’s book, I now wish to provide a more detailed idea of its contents.  First, he is well aware that there may be many different factors which have contributed to the “mass exodus” of the title (18, 83). This is only right. I think it fair to note that people who still attend Church tend to think that those who have left the Church would not have done so if they had felt as they do: that is, traditionalists naturally tend to think that people leave because they did not find the traditional faith, and what we might call “progressives” think that if only the Church were more progressive, then the decline could be reversed. One of the interesting points which Bullivant makes is that, in the USA, politics from the pulpit did not only put off those who disagreed with the priest, but in act were unwelcome to left and right wingers alike (70). I would respectfully agree with Benedict XVI: the default rule should be that priests never ever mention party politics. Just as some who were surveyed left because they thought the liturgies too staid, others left because they were too “animated” (78).

Also, one must be careful of polls and questionnaires about why people leave: people of a certain persuasion may be more likely to speak (58); and others be more reticent. It also depends on when the poll is taken: people who like, for example, traditional liturgies (not that it is only a question of liking) may long have left when the poll is taken. The reasons given for leaving the Church will then reflect the grievances of people who were left at a later point, and hence are more progressive. This is then used to say that the Church should be even more progressive, when on a longer view, what has happened is that that very agenda is merely finishing the emptying out work it has already been doing. Bullivant also notes, as I recall, that sometimes people respond by giving an answer for their leaving the Church which is not the true one, but the one they feel most comfortable with, or that they feel should be said. There are occasions where a person does not know why they left: they just sort of dropped off, but if they are asked, they might not say this, but instead apply to themselves something they have heard others say.

This said, the conclusions I referred to last week, namely that Vatican II failed in its pastoral objectives, stand out all the more clearly, because the fall off in the faith followed the Council which was purpose made to bridge any gaps between the Church and the modern person. Considering the statistical evidence for a catastrophic increase in Catholic disaffiliation, Bullivant states:

To put it mildly, they are scarcely a ringing endorsement of the liturgical reforms, at least as these were concretely applied in Britain and America. ‘Vernacular Sunday’ at the start of Advent 1964, precipitated a period of near constant change. This touched almost every aspect of Sunday Mass, from the wording of the liturgical texts themselves, to the architectural environment in which they were said, to … what day of the week Sunday actually began on. That this coincided, more-or-less exactly, with falling Mass attendance, as measured both by actual Mass counts, and the self-reported practice of Catholics themselves; that these declines have increased consistently, almost year on year, as also have the proportions of born-and-raised Catholics who never attend Mass, and/or no longer identify as Catholics; and that these downward trends have continued for fifty years, with no signs yet of abating … such brute facts cannot be denied, even if they are frequently ignored.

They also cannot be simply dismissed as a case of the post hoc ergo propter hoc fallacy. {That is, “after this, therefore because of this”} To suppose that the liturgical reforms have had no discernible effects on the participation of Catholics in those liturgies – or to argue, even if implicitly, that changes to the manner in which the faithful worship have negligible impact on their real-life religious beliefs, practices, and identities – is to reject the foundational premise of the liturgical reforms. Sacrosanctum Concilium explicitly justifies ‘reform and promotion of the liturgy’ on the basis of the Council’s own aims to ‘impart an ever-increasing vigour to the Christian life of the faithful’, ‘to adapt more suitably to the needs of our own times’, and to strengthen whatever can help to call the whole of mankind into the household of the Church’ (SC 1)’ 202

Bullivant does not deny that many other factors were at work, he merely states that to ignore the changes to the liturgy after Vatican II is to be wilfully blind. Fortunately, the changes to the Eastern Churches were in the opposite direction: towards a more ancient and authentic liturgy and away from the Latinisations which had been imposed.

As we saw last, week, Bullivant stated that once the changes started, the impression was given that if something so sacred as the liturgy could be changed, then everything could be changed. I think it goes further than this: the changes were so fast and so all-embracing, and so obviously faddish with the importation of sixties-era folk music, and “innovation” and “creativity” the order of the day, that what it showed was not only that everything could change, but they – those in charge of the liturgical reforms – were making it up as they went along. And if they were able to alter everything at a whim, why should their whim be any more deserving of respect than my own? In other words, why do I need the Church at all?

As I have meditated on Bullivant’s worthy book, it has occurred to me, more clearly than ever, that at and after this period, Church authorities were inconsistently stating: we had it wrong, we were too closed to the world and to modernity, and now we need to open, but also, don’t dare defend the old ways – just follow our commands. It reminds one of that old saying about wanting to both keep one’s cake and to eat it. Besides, how could the Church be so wrong one day and so right another? In this case, they wanted to appear less rigid, but the rigidity was still there in their opposition to what just the day before they had themselves been doing. In other words, they were not opposed to rigidity as such, what they would be rigid about.