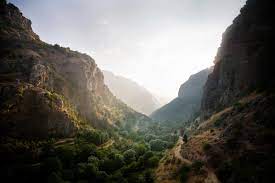 According to Fr Sfeir, the first hermit known to have lived in Lebanon was a saint known as Erasmus of Elmo. Sfeir states that Erasmus came from Formia, in Italy. The persecution of Diocletian (reigned 284-305) drove him to live in Mount Lebanon as a hermit for some seven years (34). There is reason to think that he may have been confused with a Syrian named Erasmus from Antioch. It is not possible to extrapolate much from this, even if it is accepted as true. There is, so far as I can tell, no tradition that St Erasmus was the origin of a tradition of eremitism in Lebanon, or anywhere else, for that matter.

The next hermit in Lebanon is known as “John.” He was visited, in about 480, by some scholars, who made a record of the meeting. He was then living at a Christian church in the region of Tripoli (34-35). The big difference between John and Erasmus is that, whereas Erasmus was, according to the legend, driven to hide in the caves of Lebanon, John chose first the monastic life with companions, and later the hermit’s cell in order to cleave closer to God. This is the first evidence of someone seeking to live in Lebanon as a hermit for purely spiritual reasons. Since this is about sixty or so years after the death of St Maroun, this does seem quite credible.

By the sixth century, there was a vigorous eremitic movement in Lebanon, the hermits living chiefly in caves, many of which were in the rocks of Adlun, between Tyre and Sidon. These two hundred or so grottos may have served as a necropolis or “city of the dead” for the pagans. There were three other places favoured by the hermits: Ferzel in a valley by the Beqa, Hermel by the source of the Orontes (Asi) river, today called the “monastery of St Maroun,” and Wadisha, the “Holy Valley.” Sfeir is quite clear that very little indeed is known about the hermits of Adlun, Ferzel, and Hermel (35-36). However, I might add, it may be no coincidence that the last two village names end in “El,” the name of one the chief if not the principle Semitic god. Perhaps these regions had a reputation for being holy places.

The hermitages of the Qadisha were organised around monasteries (42). As a general rule, one was not allowed to live as a hermit until one had served an apprenticeship in the common life of the monk. This mandatory period of trial was the Maronite custom until the seventeenth century (42). Within the Qadisha valley, the first and most significant monastery was that known as Qannoubine, from the Greek word koinobion, literally “common life,” but applied to a monastery. It is only a theory, but Qannubine is thought to have been founded by a student of Theodosius the Cenobiarch (44). A “cenobiarch” is the leader of a monastery. The Maronite Synaksar of Fr Najm Chehwan, says this of Theodosius of Antioch, under 11 January:

Born Theodosius in a town of Cappadocia, called Mūghār.ya.sūs (Garissus), to a God fearing family, about the year 424. When he reached the age of discrimination, he began to frequent the church and its service in the order of murattil, (Cantor). He was devoted to continually reading the holy scriptures, being influenced by Abraham, Father of the Patriarchs, who left his land and his kinsfolk, and went to the place which God had shown him.

He undertook a journey to the Holy Land, and considered from what he read in the scriptures, that God had called him, and surrendered any love of wealth and possessions, travelling to Jerusalem. On the way, he met with St. Simeon Stylites, in the year 456. (Simeon) was inspired with the gift of prophecy, and calling him by name, said to him: “Theodosius, Man of God!” He blessed (Theodosius), and sent him off.

When he arrived at Jerusalem, he made the acquaintance of an ascetic known as Longinus, and with his help became his pupil [Theodosius was the pupil of Longinus], illuminating the monastic way of life, and practising the Christian virtues. Then he went to dwell in a cave to the north east of Jerusalem, in a valley with a view of the Qidron Valley. In that cave he practised the life of an ascetic. His virtues came to be well known, and many came to him, to be his pupils. Some of them brought their wealth with them, and he founded a large monastery, and provided for them a constitution for the common life. This was in the year 489. In view of the fame of his virtues, the Patriarch of Jerusalem appointed him over the business of the monasteries. This was in the days of St Saba, and the monks were commanded to dig their own graves with own hands, and then, facing it, to meditate upon the hour of death, and their eternal fate.

God granted him the gift of being able to work many miracles. Because of his reputation for holiness and wisdom, the Patriarch of Jerusalem made him head of the monks living the communal life [this is why he was called “Cenobiarch’]. When he was about ninety years of age, the Emperor Anastasius, who was an enemy of the Catholics [Anastasius being a Monophysite] … so Theodosius and Saba went to the defence of the true faith. In the year 513, the Emperor expelled him, and he sought refuge in Lebanon. The Maronite tradition tells us that it was he who founded the monastery of Qannoubine, the “monastery of communal life,” in the Qadisha valley … Theodosius returned to Palestine, where he spent his last years [possibly after the death of Anastasius in 518]. He died in 529, at the age of 115. May his prayers be with us. Amen.

Other sources give the interesting detail that when he visited St Simeon the Stylite, he was invited to climb onto the pillar to speak with Simeon. St Simeon was, as is well known, a significant influence on the development of Christianity in Mount Lebanon. This shows that even the rigorous life of St Simeon made place for some human contact.

Sfeir adds the note that in the Maronite synaxarion, or sanctoral calendar, he is noted as one of the greatest of the saints. I must assume, although it is not explicitly stated, that while in Lebanon, and organising the monastery, he nonetheless lived as a hermit. With the departure of Theodosius from Lebanon, we have the ascetic life well and truly established in the Qadisha Valley.

Finally, some people, contradicting the most ancient tradition, assert that St Joseph must have been a young man to have travelled to Egypt and back. Apart from the fact that they never produce a study to support their claim, the example of Theodosius who travelled from Israel to Lebanon twice, when he was over ninety and then over one hundred, shows that difficult travel was possible.