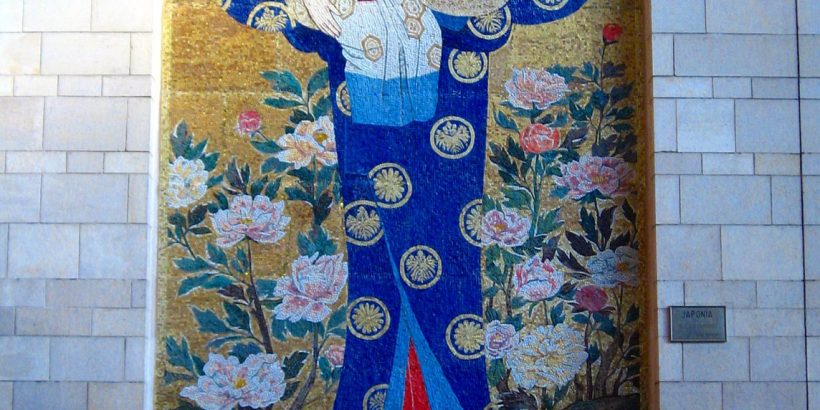 It is noteworthy that, so far as I can see, and Fr Badwi’s icons excepted, Maronite depictions of Our Lord present Him as a European, with a fair complexion and light to dark brown hair. In fact, he is at least 95% of the time shown with Anglo-Celtic features. In the other 5% or less of portraits, He is imagined as East European. I almost never seen Him shown with black hair let alone olive skin. I have elsewhere written about the evidence for His appearance: What Did Jesus Look Like? – Maronite Meditations: Fr Yuhanna Azize As Professor Taylor argues in the book I reviewed there, Our Lord would have looked like a modern day person from the Middle East (she mentions Iraqi Jews in particular) with fairly close cropped hair and beard (not long locks), and with an olive complexion.

So, very often the question of how to depict Our Lord is posed as a dilemma: we either present Him as an authentic inhabitant of ancient Palestine, or we make Him look like someone from our own culture. We Maronites are fortunate: we do not have this dilemma. We can – and I suggest – should do both. If we paint Our Lord as a modern Maronite from the Middle East we have painted Him authentically, because no one can tell Jews and Maronites apart. And as we have excellent examples in Fr Badwi’s icons, the icons we use in most of our churches, why do we still put the other art in our places of worship and homes?

As Our Lord is often shown as Anglo-Celtic, it is more of the same for Our Lady: in a preponderance of her art, she is shown as pale with English features, if not positively Scandinavian (she is lucky to even look like a fair Italian). But there are still some icons and paintings such as Our Lady of Zgharta where she is unmistakably Semitic: whether you say Jewish, Israeli, or Lebanese is all the same. I have been to Israel and could not tell the Jews from the Maronites by appearance alone.

Yet, it does not have to be this way. It is well-known that other cultures, such as those of Asia depict the Lord and the saints as Asian. Consider the delicate and beautiful depiction of Our Lady nursing the Child Jesus which I have selected for this post. In the cathedral of Darwin there is a tender one of Our Lady and her Son as an aboriginal mother and child (however I cannot copy it for this post).

Why is it that the Japanese do not think anything of a Japanese-featured Jesus, while we Maronites opt for a Euro style? It tells us something about the deep inner consciousness of many Maronites. I doubt I need to press this point.

Now, Maronite art is quite different when it comes to the modern Maronite saints. After all, there is a check there: we know what they looked like. But consider most of the older saints, whether St Joseph, the apostles, or St John the Baptist. Do they not often look like Europeans with beards? Or St Moura? St Marina? St Aquilina? They could have done their schooling at the Presbyterian Ladies’ College, but for their robes and veils.

I think there is a real lesson here. Consider how Maronites flock to the universities of Europe to write theses on St Thomas Aquinas. I am sure their work has worthwhile aspects, but there is much work needed to help restore and re-present the authentic Maronite tradition. There are many Syriac manuscripts of anaphoras and prayers, hymns and major texts, in need of modern accurate publication and translation. But our best and brightest cannot be engaged in that work, which I suggest the Maronite Church needs, if they are already engaged in “necessity and cause” in late scholasticism.

I have mentioned in my posts, how the editions and translations of Patriarch Dwayhi’s works are notoriously loose and incomplete. Even the late Fr Moubarac was cavalier in his “translation” of sections from Dwayhi.

It should be possible to say that we wish to study and promote our Maronite religious culture without engaging in any criticism of the Latin Church, or of anyone else, for that matter.