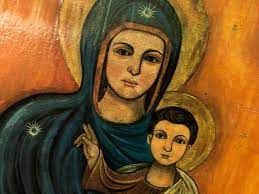 First of all let us ask our guardian angel to help us meditate well and dutifully upon the mystery of Our Lady, to commence with what it clear, and to humbly approach the mystery, step by step.

We know that she is the purest of creatures, the holiest of all the children of Adam. It has to be so, for she was the Mother of Our Lord. Let us pause here for a moment: when Our Lord was to be incarnated in the fullness of time, he did not spin the roulette wheel to take a chance on who His mother would be. He did not draw a card from the pack, or throw the dice, to be born wherever and whenever. Rather, He must have chosen the time and the place – we know this, and that the Jewish people were prepared so that the Saviour would be born amongst a people who had been vouchsafed some knowledge of the true God. He must also have chosen His mother, and yet He would not force her hand – she had to accept that she had been chosen. Once more, we know that this is true, because St Luke tells us the story in chapter 1 of his Gospel.

St Luke relates that the archangel Gabriel greeted her with these words: “Hail, full of grace, the Lord is with you: blessed are you among women.” Much has been written about these words, but the many attempts to translate this so that it accords with one doctrine or another, are laughable. We commence with what is clear: no other human in recorded history ever received an angel who told them that the Lord was with them, and that they were the greatest of their sex – because that is what “Blessed are you among women” means – it does not mean that if you look at all the women in the world she is one of the best, it means that she is definitively the greatest.

I repeat, no one else, whether male or female is greeted by an angel of God with such words: God is with you and shows you favour. This is repeated in verse 30, where the angel tells Mary not to fear because she has found with God. I think that verse 30 is often overlooked, so let us consider this more closely. The Greek verb used here is heuriskō, which according to the new Cambridge Greek Lexicon, has a prime meaning of “to find (by seeking or by accident).” It can also mean “to obtain.” Now, it is not conceivable that the angel meant that by some fluke Our Lady had found favour with God: her name came up in the lottery, or something like that. It can only mean that her virtues had endeared her to Him. This is a reminder to us of the much-neglected topic of being pleasing to God (as opposed to currying favour with people of power and prestige). This short phrase also shows, if more was needed, that the distinction made between faith and works so that salvation is by faith alone is a false dichotomy. But I will not stress that aspect here. If one re-reads Luke 1:26-35 with these thoughts in mind, it soon becomes apparent that the superlative holiness of Mary is not something that was forced upon her, or a fiction invented by the Church, but that it is a fact and that had it not been so, Our Lord could not have been born to her.

Then, the Gospel of St Matthew adds further details such as that the Magi worshipped Our Lord while He was with His mother, which I presume means in His mother’s arms. Once more, let us not rush past this: the Greek states that they saw the Child Jesus with His mother and falling down they worshipped Him (Matthew 2:11). Now, it just so happens that this is how Maronites always depicted Our Lady – with the Lord, and they often portrayed Him with her. But clearly, if one thinks of the icon from Elige, the Maronite custom of making a holy picture of Our Lord with His mother finds warrant in the most ancient and venerable of all the Scriptures – the Gospels.

There is another very interesting point: when St Matthew wrote that Jesus was with His mother, and when St Luke that the Lord (God the Father) was with her, they used the word meta, whereas when the angel says that she had found favour with God, he uses the word para. Now Pietro Bortone’s Greek Prepositions from Antiquity to the Present, tells us that the preposition meta had the meaning of being “amidst” while para meant more being by the side of, in the area of. So the presence of God, in both cases, is with Our Lady in a much stronger sense, possibly even all about her, while Our Lady’s favour has come to the presence of God. There is, I think a lot of theology in these simple words.

Now, an increasing number of scholars, with whom I respectfully agree, believe that the Gospel of St Matthew was written after and with that of St Luke, so that he was assuming and developing what was in that work. Then, the last of the Gospels was that of St John, who assumes the others. He places Our Lady at the start and at the end of the Lord’s ministry, thereby associating her with the whole of it, and effectively saying in John 10 (at the Crucifixion) that to truly be the disciple of Jesus, one has to take Mary as one’s mother, and that she will take us as her children.

I shall not go into it here, but the Maronite feasts of Our Lady used to follow this logic: they all came after feasts of the Lord, even the Assumption which was not originally on 15 August, but in January, after the Epiphany. Perhaps in a future post I shall explore the Marian celebrations.