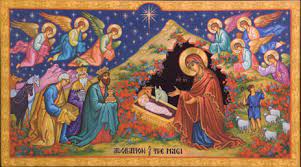 Jacob of Sarug’s First Homily on the Nativity

In his first homily on the Nativity, written as a poem rather than a speech, St Jacob of Sarug presents two main points for our reflection: first, that the Nativity is the Feast of the Incarnation, when He who is hidden from humanity was, of His own Will, revealed to us; and, following from this, that this is therefore a great feast of the renewal of humanity, and therefore for the image of God in which we were made, and which had become corrupted (line 104).

If we ponder that, we find much to wonder at: human nature was created in the divine image and likeness, then fell through sin, and was thereby altered. The original human nature must have been noble and pure, able to do and to choose the good, able to recognise the presence of God at all times. Adam and Eve had a direct and clear knowledge of God. The world they lived in was glorious, and they were living without fear or shame. They must have been kind, gentle, tender, considerate, and forbearing. This pure, good, and noble character was the original human nature. With it, of course, came free will, because without that, these virtues would not have had any meaning: they would just be programmed reactions and responses.

As we say in the Maronite Liturgy, this original human nature has been distorted. But we have not lost a vague sort of understanding that this is how we should be, and the longing for it is still alive, deep within us, in our consciences, I would say.

Through the Immaculate Conception, a girl was born whose soul was not subject to this distortion. She had that nobility which had been lost, so that, like the first Eve, she could make a free choice. In her case, as we know, she accepted the Will of God, which was put to her not as an order, but as a gracious offer. St Jacob stresses the freedom of Mary’s will, having Our Lady say “if He has directed His will towards me, I do not flee away” (414), so that “by her will (she) opened the door and then the King entered, so that through free will the perfect seal might be honoured” (my italics, 417-418).

With the Incarnation, human nature and the divine were reconnected, so that we could become the children of God, as St John tells us. This is the meaning of St Jacob’s lines: “On this day in which the old things have been renewed, the Lord of Kings has renewed for us the things for former times” (1127-1128). So too, the Incarnation is a New Creation: “The world was renewed in praise at the nativity of the Son from that time, on His great day, a new creation was established” (1033-1034).

This is all brought together and expressed with the elegance and simplicity of the theology of typology, when Gabriel says to Our Lady:

In the furnace of your womb He will cast and prepare an image for Adam;

and into it the God of all will lower Himself to come to birth.

and through it He will ransom the whole world from servitude (289-292).

A little later, St Jacob returns to this theme, with special emphasis on the hiddenness of the work of creation which takes place within the mother’s womb, through the instrumentality of imprints and images, which prepare the human house, the embryo into which the soul of perfection is breathed (nō.faH naf.šō da.gmee.roo.tō b.Kool.hoon 3oo.le, 449-460, also 780-790).

St Jacob imagines St Elizabeth saying to Our Lady, at the Visitation: “… the new heaven that has travelled and come, entered with me. The chariot (of Ezekiel) … is more insignificant because it carried Your Son in likenesss (bad.moo.tō), but you (carry Him) in reality” (514-516). He has previously told us that the conception of John the Baptist by Elizabeth is a sign of the Virginal Conception of the Lord, because Elizabeth had been barren, but now she conceives, and neither barrenness nor virginity prevent God sending life into the womb (315-320).

Integral to this is that the Incarnation was the prelude to the sacrifice of Christ, “the Shepherd who descended to become a victim among His flock” (114). By His Incarnation, God weaves a new garment for humanity, a theme which is central to our understanding of baptism for this garment is a robe of glory (278). In Eden, we were clothed in glory, but when we sinned we lost that glory, which is how Adam and Eve knew they were naked. The Lord restores that garment of glory to us in baptism when He becomes the light of our souls. I shall not dwell on these aspects here.

Also significant for Jacob, is that the questions asked of the angel by Our Lady were asked in a spirit of trusting faith: she believed the angel’s message, she asked with a joyful confidence, “how can this be?” This is contrasted with the doubting scepticism of Zachariah (327-360, and 383-385).

I will close with this meditation: to an extent, we have some share in each of the characters in this Nativity. We can therefore, with some caution, apply to ourselves, the words which, according to Jacob, the Archangel addressed to Our Lady when she asked her question: