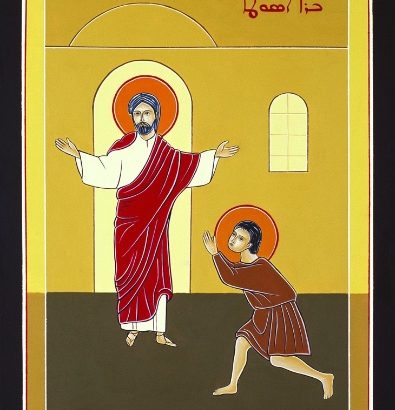 There is no mucking around with the Maronite icon for the Sunday of the Prodigal Son. The father of the parable is unequivocally shown as Our Lord Jesus Christ in His glory, and His house is the church. The words in Syriac are brō ōsuTō, “the glutton son, the prodigal son.” The word comes from the Greek asōtos which means “wasteful (in the use of resources)” and when referring to a person means “profligate, prodigal (especially with money).” It can also mean “(a) ruinous (act)” and “impossible to rescue (morally)” hence “reprobate” and “depraved.” Cambridge Greek Lexicon, I.236. It comes from the verb to save but has the negative prefix before it (in Greek, and sometimes in English, “a” as a prefix is a negative, e.g. “a-moral” means “not moral”.)

Part of the reason I am stressing this is that we no longer know what the word “prodigal” means, and so we miss what is being said about the son. The word “prodigal” does not appear in the parable, but St Luke does say that the one who had been dead now lives, and the one who had been lost has been found. That is, he has come to salvation. The Syriac use of ōsuTō is therefore inspired, because it captures both the story of the son – he had been wasteful – and the climax and lesson of the story – through repentance he had come to salvation.

I think that we lose a great deal by not learning Syriac. To an extent we do not realise, our minds are held by concepts which are foreign to our authentic Maronite heritage – and they are poorer for it. The word “prodigal” is of course from a Latin root. I am very fond indeed of Latin. I have more Latin books in my library than most people know where ever published. But the Latin heritage is not the Syriac: in some ways it is wider but in others it is more narrow. “Prodigal” comes from the verb prōdigere to drive away, and means to be wasteful, a wasteful person drives away their wealth and substance. It is also the root of the word “prodigy” meaning a “marvel” or a “wonder,” although scholars are not sure why this should be. It also produces the word “prodigious” meaning ‘astounding.” So the idea of the “Prodigal Son” conveys a confusing complex of ideas to modern readers. It also focusses us quite exclusively upon the idea of the way he burned through his inheritance. It shows what shocked them when they fixed the title “Prodigal Son” on this parable.

But I do not think we have to remain with that focus: we can and should see the parable as a whole, and the Syriac brō ōsutō does that magnificently because at the end salvation comes to the hosue.

This parable carries for us a great message of hope, for who among has not forgotten their Father in heaven? And who among does not yearn to return to Him and be welcomed by Him, and acknowledged as His own child?

There is of course much more in this parable, but I shall keep this short in order to deliver one fundamental message.