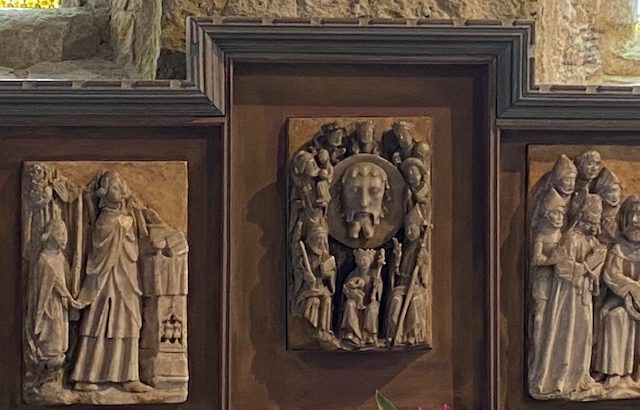 I write on 17 May in the Year of Grace, 2022, from Marazion, Cornwall, within sight of the former Benedictine monastery of Mount St Michael. To keep this short, it is a wonderful place to visit and to pray.

There is today, sadly, only one sole altar, and that is a late addition. At the Devastation of Monastic England (a.k.a. the “dissolution of the monasteries” a heavy duty euphemism), the many consecrated altars there were doubtless destroyed. I am told the chapel was used as a storage area.

Well, when the descendants of the new owners “restored it” (partially), they brought in an altar and an altar carving. It is known that it was a late medieval or very early modern one from Catholic Europe. It is not original. See the illustration herewith. I was assured that the central panel depicted the head of St John the Baptist.

In my view, this is quite wrong. I am sure that the triptych of carvings above the altar form a coherent whole, based around the Catholic doctrine of the Mass as being the true sacrifice of Our Lord. This means that the central panel is itself based around the depiction of the Lord upon the Eucharistic Paten (the round golden plate the priest uses at Mass). It is not, therefore, the head of John the Baptist. I am fairly sure about this, and say it for the following reasons:

Now, for comparative art, I am not at home with my library, but this fourth century Spanish paten shows Our Lord with Ss Peter and Paul: https://www.thelocal.es/20141002/4th-century-glass-plate-of-jesus-unearthed-in-spain-paten/

Depicting Our Lord with a forked beard is a feature of Syriac art, but is not exclusive to it http://theshroudofturin.blogspot.com/2008/07/re-middle-eastern-features-on-shroud.html

The tau cross, too, was originally Eastern but then spread: http://franciscanseculars.com/history-of-the-tau/

May St Michael the Archangel care for the Church, protect us from Satan, and restore the faith across the globe.