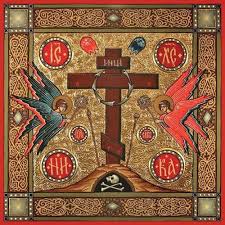 In the two access prayers of the Maronite Divine liturgy, the priest chants “Salaw 3alay, metool moran,” and crosses his hands over his breast, bows to the left and then to the right. It seems that the priest is moving his head in the form of a cross: La Sainte Messe selon le Rite Maronite, p.7, “Arrivé à l’autel, le prêtre s’incline profondément, fait avec la tête un signe de croix [Having arrived at the altar, the priest bows profoundly, (and) makes the Sign of the Cross with his head].

This is more than making the Sign of the Cross in the air, it is a partial identification of his entire person with the Lord. One could say that the priest prepares himself to be the instrument of the Lord so thoroughly that the difference between symbol and reality no longer holds. It is right for the priest to contemplate this: am I doing my best to be worthy of this great honour? Am I oblivious of this? If not, do I see this as something to which I am called, or do I too often take it for granted?

Next, it is believed that the practice of painting a Cross on the wall of a house began because, being put on the Eastern wall of the house, it showed the direction of prayer. That is, the Cross or crucifix on a wall of a house functioned something like the qibla in the mosque would, hundreds of years later. Daniélou argued that this practice showed that early Christians prayed towards the East, shown by the Cross of Glory and the rising sun, with “eschatological expectation.” The Theology of Jewish Christianity, 268-9. Once more, do we just take the Cross or Crucifix in our houses as just a nice decoration, or as something more than that, a marker of our identity? We could, if we meditated upon it, see that it is a great privilege to be able to place the symbol of Christ in our own homes, and to be able to sit before it.

The Cross had very early become a symbol of Christ, His Life, His death, and His resurrection; of both His passion and His glory. In some of the first Christian writings, the Cross  is even treated as if it is alive, dies with the Lord, and rises with  Him, both from the grave and at His ascension. This “theology of glory,” based around the “Cross of Light,” is believed to be part of the ancient Antiochian tradition.

In the late second century, Irenaeus wrote that Christ, the Word of God almighty, is invisibly in the midst of the world, extended throughout the universe in all its length and breadth and height and depth. Meditating on these four directions, he says that by “the whole universe is ordered and disposed – [for] in it is crucified the Son of God, inscribed in the form of a cross upon it all … For it is he who illuminates the height, that is, the heavens; and encompasses the deep that is beneath the earth; and stretches and spreads out the length from east to west; and steers across the breadth of north and south; summoning all; that are scattered in every quarter to the knowledge of the Father” (Dem. 34) This is called the Cosmic Cross.

This way of envisioning the Cross draws upon Ephesians 3:18. Elsewhere, Irenaeus speaks of Christ’s extending his arms on the cross as a symbol of the reconciliation of Jews and Gentiles, an allusion to Ephesians 2:14-16: “For He is our peace, who hath made both one, and breaking down the middle wall of partition, the enmities in his flesh: Making void the law of commandments contained in decrees; that he might make the two in himself into one new man, making peace; And might reconcile both to God in one body by the Cross, killing the enmities in himself.”

Daniélou says: “… Christ restores unity in a two-fold sense. He destroys both the vertical wall which separates the two peoples [Jew and Gentile], and the horizontal one which separates man from God; and he does this by the Cross, which now seems to represent the double operation of Christ extending both vertically and horizontally to form a cross.”

The Theology of the Cross

What use can we make of these thoughts and pictures? Are we meant to take them seriously, and accept them as factual? And if not, what is their value?

In typological  theology creation comes from above, it is not evolution from below. All the world is created through Christ (“In the beginning was the Word, and the Word was with God, and the Word was God. The same was in the beginning with God. All things were made by him: and without him was made nothing that was made. In him was life, and the life was the light of men”). In particular, man is created in the image and likeness of God (“Let us make man to our image and likeness” Genesis 1:26). All the universe is made on a divine pattern or type.

Typology is not a philosophy, although it has philosophical implications. It is the thinking through revelation, and applying it to our world and our lives. Perhaps the critical insight here is that typology sees in creation the pattern of heaven on earth.

The pattern of the Cross is in all human life. That pattern can never be reduced to a simple formula, but can usefully take the image of the Cross reaching vertically from heaven to earth, and horizontally across the universe. The Cross was long recognised as being Jacob’s ladder (“And Jacob had a dream about a ladder that rested on the earth with its top reaching up to heaven, and God’s angels were going up and down the ladder.” Genesis 28:12). In one sense, to see the pattern of the Cross in our lives is to see that we are meant to aspire to heaven while living in this world.

Bringing the Cross into our Lives

It is not necessary to seek martyrdom in order to take up our Cross and follow Him (Matthew 16:24; Mark 8:34; Luke 14:27). We can do so through many small mortifications in daily life: hence the great value of fasting and giving up things like sweets and junk food, or for a certain period giving up those foods and drinks which we enjoy the most but can easily replace (e.g. if you like coffee, for mortification have tea.) We have to begin with the body, because the body has so much power over our minds and emotions. It also means to accept suffering without self-pity. To accept whatever grief comes our way in the hope of transformation by the grace of God.

The Way of the Cross takes on a new dimension when we work against our self-will, our desire to dominate, to our own way, our pride and vanity. We all suffer from impatience, and yet it is necessary, if we are to make any progress in the spiritual path, to learn patience. I will refer to a vision which was vouchsafed to an English mystic, John Bennett on 27 March 1959. “I became aware of Jesus on the Cross and was raised up and entered into His body, and looked through His eyes on the maddened and uncomprehending crowd below. I became aware of the dreadful stench and of swarms of flies over the Body. Everything in me was outraged and disgusted. There was no mercy anywhere; nothing clean. And I knew that Jesus was aware of it all and infinitely more: of all human uncomprehendingness stretching away and away in time and place. I was aware also of the immensity of the love that could see all and forgive all. … Then I fell into a kind of unconsciousness in which everything became remote, and out of the darkness a brilliant light emerged, growing brighter and more and more glorious. In this radiance I was aware of the Other Nature of Christ; the glorious Divine Nature, untouched by anything that exists. Gradually the radiance rose higher and higher above me, and I was left behind. I became myself again, wondering what might be the meaning of what I had lived through. I understood that I must learn to live with the reality of the Christian beliefs, and to accept that there is here a mystery that the mind of man never can and never will penetrate.” Witness, 277.