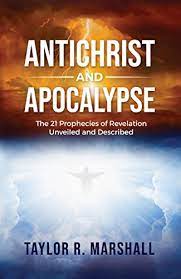 This a significant book, which seems to be part of a nascent movement within Christianity seeking to interpret Scripture with more respect for the tradition, consciously being less suggestible to the assumptions and prejudices of modern criticism. Marshall combines interpretation of scripture, theology, and pastoral questions, as he explores the meaning and ongoing significance of this most astounding book of the Bible.

The basic form of the volume is one well known from history: the Apocalypse is taken section by section and commented upon. However, Marshall adds a sound extended prologue which provides essential background material from the Old and New Testaments, and examines the murky figure of the Antichrist. Properly and traditionally, Marshall takes the Bible as a coherent whole, not as a congeries of separate scrolls to be interpreted in isolation one from the other.

The Antichrist Is yet to Come

The most important point is doubtless that the book leaves one not only understanding the Apocalypse better, but convinced that it is indeed a revelation of what has been, is, and is to come. It makes an impact: by the time you are drawing to the close, you feel in your chest that the Lord of the Apocalypse is indeed Our Lord Jesus Christ, and He is calling us to persevere in the quest, even the battle, for holiness. There is the warning that the Antichrist is yet to come, with its implicit exhortation to hold to the faith, and to be on guard.

Marshall brings out the complementary relationship between Genesis and the Apocalypse. The way that the Christian dispensation completes the Jewish  can be neither an accident nor an ordinary contrivance: it is so deep and wise that I am persuaded that it is the work of inspiration.

In painting his picture, Marshall restores to our vision the tremendous power of the revelation: “The wrath of [Christ] the lamb is terrifying” (106). By showing the inherent connection between the Apocalypse and the whole of Scripture, and its applicability to the Church in history, the unveiled terrors make sense.

Today we tend to read the Apocalypse under the influence of certain modern tendencies, but which come down to this: we read it as an ordinary piece of literature. It is not the rantings of someone, or worse, of some people, who have become unhinged. Neither is it a dated and obsolete document, obsolete since the sub-apostolic age. All this is wrong. To forget that it is Holy Scripture diminishes the thunder of the Apocalypse.

Against such errors, Marshall shows how the Apocalypse is of a relevance to humanity which will end only when Christ is All in all. He demonstrates the coherence and unity of the Apocalypse in itself, of it within the New Testament, and within the Bible. For example, I learned a lot about the prophetic books which I had not been expecting to see in this book. Larger scholarly works, even three volume commentaries, allude to the prophets, but give far more space to the wiseacrings of modern scholars. Marshall tells us what the prophets said, and how it all ties in, and still applies to us today.

For me, the most astounding of what I will call Marshall’s “great points” was his demonstration that “Babylon” of the Apocalypse is Jerusalem more than it is a reference to Rome: see especially the chapter “Babylon the Great Is Fallen: (Apocalypse 18).” He by no means originated this idea, but he presents it more clearly and formidably than any other exposition I have yet seen. This has consequences for our understanding of the Apocalypse, for its dating, and for its applicability to us today. That is, the Apocalypse is no mere diatribe against an already fallen empire: it is a call to all of us to faith, hope, and love; and to struggle selflessly, in the service of God, in the battle between good and evil.

This is critical. Because Revelation is not merely addressing a long-dead generation, Marshall can write: “The Apocalypse takes away the veil. In this life, we see things as jumbled and mixed. But when we remove the veil, we see God against Satan. Kingdom against Kingdom. Bride against harlot. Christ against Antichrist.” (18) The spirit of the Antichrist is found in idolatry (22), a grim and timely reminder of the very final words of 1 John 5:13: “Little children, keep yourselves from idols. Amen.”

Also significant is the insight that in Apocalypse 22:1 (“And he shewed me a river of water of life, clear as crystal, proceeding from the throne of God and of the Lamb.) we have a biblical text for the procession of the Holy Spirit (the river of life) from both the Father and the Son. (277-278) Likewise, when Apocalypse 14:13 says of the redeemed that their works follow them, this settles in favour of Catholicism the “justification by faith alone” debate (196) That is, the Apocalypse also reveals theological mysteries to us, but we have lacked the eyes to see them, having been blinded by the dust of modernism.

I think this is foundational: modern “theology” is, in my humble, more ideology than study of divine things, and hence we need to rediscover the pure ancient Christian tradition. Marshall gives one of the basic principles of the ancient Semitic-Christian theology of typology, when he writes: “The reality of the Church is in heaven perfectly and then progressively over time on earth.” (276) Note also his comments on foreshadowing and archetypes (16); Lebanon identified with the Temple (144); Solomon a type of the anti-Christ (231).

The theology of typology explores, among other matters, how eternity manifests in time. If we apply our ordinary ideas of time to all of reality, and especially to the divine dimension, we will go wrong. Thus, I was quite interested in Marshall’s statement that: “The chapters of the book of the Apocalypse are not presented in chronological order.” (257, see also 243 and 258-260). The careful reader must understand that chapter 20 expands on something mentioned earlier in the Apocalypse.

One of the key elements in typology, or rather, one of the key things revealed to us by typology, is that Christ is the type of the priest, in fact, the High Priest, and we who are privileged to be priests on earth, are antitypes of the Lord. The question is: are we striving to imitate the ideal, or are we distorting His image? This is not something Marshall speaks about specifically (it may not be his interest, yet), but see his comments on priests, the submediation of prayer, celibacy, and the significance of linen garments illuminating. (98 n.80, 191, and 247)

I have omitted mentioning some points I had thought brilliant, but even time must have a stop. I would like to add one note in support of Dr Marshall on dating: in “The Monetrary Crisis in Revelation 13:17 and the Provenance of the Book of Revelation,” (Catholic Biblical Quarterly, 2009), Deborah Furlan Taylor, convincingly contended that the statement in 13:17 that “no one could buy or sell without holding the mark [or] the name of the beast, or the number of his name,” could only plausibly refer to coin circulation in Palestine during the early to mid-60s AD. That is, this verse is evidence for Nero’s reign. Further, the reference to a mark on the forehead, was probably to the census of Cestius in 65 or 66. This is rather powerful support for Marshall’s thesis in so far as it would mean that the Apocalypse was written before the destruction of Jerusalem in 70: a thesis which I consider almost certainly correct.

The greatest effect of reading Antichrist and Apocalypse was that it made me seriously ask myself whether I am living the God-oriented life, to which I, as a baptised Catholic, have, by the grace of God, been called. It opened my eyes in wonder at the richness, depth and sublimity of the Apocalypse (the Book of Revelation), and of the faith. By placing the Apocalypse in its true context of the entire Christian tradition including Scripture, Marshall demonstrates how it forms an organic part of Scripture, while completing it (complementing Genesis as the end perfects the beginning, and uniting in one vision the entire divine economy of salvation). Marshall covers, with clarity and verve, the fall of the devil, through his struggle against God by attacking His servants on earth, the prophecies of Antichrist, and the inevitable defeat of evil.