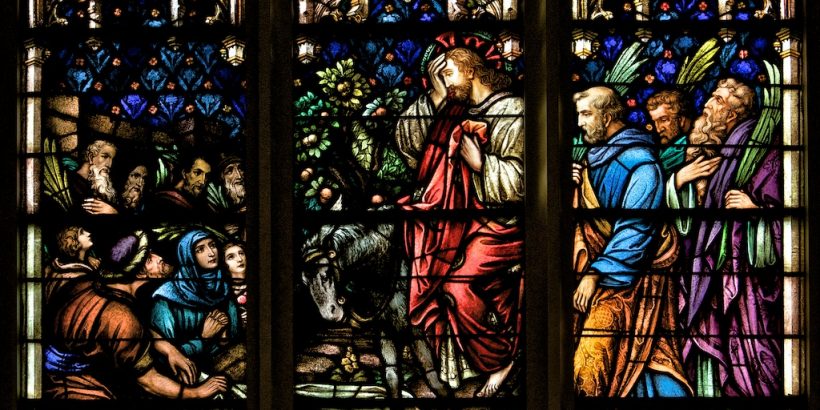 “Hosanna Sunday” (Syriac, Had b-šabo dooša3ne), is one of the great feasts of the Syriac Christian calendar. It is not as important as Easter, but it is more than just another Sunday before the Resurrection. On this feast we remember both the greatness and the humility of God, and that the highest activity we can achieve is humbling ourselves and adoring Him.

Behind the colour and noise of the world, there is always the mysterious wonder of God. If there is one Sunday when our attention is drawn to the greatness of God, it is this Sunday, when we are also reminded of the humility of the Lord Jesus Christ who entered into Jerusalem on a young donkey. The Syriac emphasis on praising the greatness of God explains why in the Maronite tradition it is a day of gladness. Because of their joy at the first Hosanna Sunday, the children especially are dressed up in special costumes. It marks the end of Lent. It is not a day of fasting. But we know from what will follow that it is also the doorway to the Week of Suffering, which shall reach an apparent climax in the crucifixion of the Lord, yet gives way to the glory of the Resurrection. Like that sacred week, it contains aspects of both sadness and joy. Let us look at this in more detail.

Hosanna Sunday is one of those events which is mentioned in all four of the Gospels (Matthew 12; Mark 11, Luke 19 and John 12). They say that the entry into Jerusalem fulfilled the prophecy in Zechariah 9:9 (a matter which Ss Matthew 21:4 and John 12:16 especially stress). They explicitly tell us that His entering upon a donkey was a sign of His humility. It is more to be expected that a king would enter on a horse, an animal which could be used in war, rather than the donkey, a domestic animal.

The Gospels also mention that strange manner in which the Lord tells them how to find the donkey and its colt, and what to say when they should be challenged at the time of bringing them over to Him. In addition, there is a clear echo of Psalm 118, a great hymn of joy in the saviour who comes in a procession in which people carry leafy branches. This was clearly significant to the evangelists, perhaps because it showed how the Lord had planned everything in a manner which the no mere human could have.

St Matthew tells us that when the Lord entered Jerusalem riding on the donkey, people laid their coats and the branches of trees before Him. Crowds before and after Him shouted: “Hosanna to the Son of David; blessed is he who comes in the name of the Lord. Hosanna in the highest!” The word “Hosanna” is almost certainly an Aramaic, rather than a Hebrew term, meaning: “Save us, we pray!” and spoken in praise of the One who can save. He was entering Jerusalem as its king and Messiah.

The Lord then went up to the Temple where the children were calling out “Hosanna to the Son of David!” When the priests and scribes complained about this, asking whether He could not hear what they were saying – as if He should have objected to the children saying it – the Lord answered them: “Yes, and have you never read the text: ‘Out of the mouths of infants and nurslings you have brought forth praise’?” (Matthew 21:15-16) St Luke adds that some of the Pharisees who were present told the Lord to rebuke his disciples, but he replied: “I tell you, if they keep silent, the stones will cry out!” (Luke 19:39-40). St Matthew also mentions that as He entered, people asked who He was, and some replied: “This is the prophet Jesus, from Nazareth in Galilee.”

In his Hymns on Virginity 33 and 35, St Ephrem draws a parallel between how the roads of Jerusalem were prepared for the Lord by the cloaks and the branches which were laid before Him, and how He calmed the waves and walked on the sea. In number 35, Ephrem even imagines the Mount of Olives thanking the Lord that He allowed the children to make a new path smooth with their branches and clothes. Then, in Hymn 51.6, a little before mentioning Hosanna Sunday, St Ephrem has these profound lines: “When there is no road at sea or on land, it is disturbing. In You are paths made plain and clear.”

He is the Way, the Truth and the Life (John 14:6). The type or pattern of path and aim is seen when John the Baptist prepared a way for the Lord in the wilderness. We need a path which leads to a good destination, and the Lord is that path across the wilderness, the sea, and through the city. The destination is holiness: God is the only worthwhile aim.

In other words, we can enter into the spirit of Hosanna Sunday by preparing inside ourselves the path which Our Lord can take, and by welcoming Him, for he always wishes to enter the city of our stubborn attitudes, the wilderness of our dry hearts, and the sea of our emotionality. For this, we offer Him our humble worship. Having worshipped, we love Him even more, and can worship Him more fully and selflessly.

St Ephrem also tells us that the children rejoiced, and sang that the branches they took from trees glorified Him who was the Tree of Life, and in his humility, loved them as children (Hymn on the Nativity, 8.19). This theme of glorification was taken further by St Jacob of Sarug in his Memre on Hosanna Sunday. Let me close with some lines from it:

The created natures never withhold praise to the Lord …

All dense forests and trees bearing fruits, and cedars,

give praise daily with great wonder.

Heaven and earth are filled with His great glory, as it is written,

And whatsoever is created whispers praise to its creator.

All his creations with their tongues sing the glory

The stones call out His praise when they are requested

and He alone knows how to hear their tongues.

Then they (creatures) were prepared when He was carried about on the colt,

… the whole of nature gives thanks to you because it has been renewed by you,

for the whole of it ought to acknowledge with wonder your humility. (277-278)

All giving thanks to you because by your coming everything is renewed. (303)