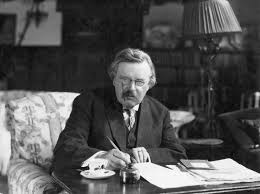 This is the first part of a multi-part series. I am going to first of all say something about Chesterton and the author (Fr Aidan Nichols O.P.), because it is necessary to have some background before one comes to the book, as it is a study of one specific aspect of Chesterton’s thought, and one cannot understand it unless one first has an overview of that thought.

I was not sure what to expect from this volume. But I was more than surprised. Fr Nichols has done a remarkable job of sifting the Chesterton corpus to produce a unified and coherent account of Chesterton’s theology. Although I have been reading Chesterton for about 45 years, I was surprised – and educated – by this remarkable little book.

G.K. Chesterton (1874-1936) has rather a mixed reputation today. His main occupation was as a journalist, but today we would probably call him an opinion columnist. Much of his journalistic work appeared in the Illustrated London News, the Daily News, and G.K.’s Weekly. However, we should bear in mind that in Chesterton’s day, the mainstream and large circulation newspapers and magazines published longer and more serious articles than they would dream of today, and journalists were expected to write English well. With very few exceptions, none of the journalists writing today, even the major ones, can compare with those writing in Chesterton’s day. Then, in addition, there were small circulation journals like The New Age, for which Chesterton wrote, which were of an even higher standard. In fact, if one wanted to find someone to contrast with Chesterton, I would suggest that one could hardly do better than to take A.R. Orage (1873-1934) the editor of The New Age, and Chesterton’s almost precise contemporary. If you do not know who Orage was, check the Wikipedia article.

Now, even as an author and opinion columnist, Chesterton’s work was controversial not only for what he wrote, but also for how we wrote it: he was notorious for his use of paradox. A paradox is an apparent contradiction. Some of Chesterton’s paradoxes were really just clever word-play, e.g. “The madman is not the man who has lost his reason. The madman is the man who has lost everything except his reason.” But perhaps the truest of his well-known paradoxes is: “When a man ceases to believe in God he does not then believe in nothing, rather he believes in anything.”

Like Orage, Chesterton also wrote some short books, and he is justly remembered and celebrated for these. I would distinguish four of them above all: Orthodoxy, The Everlasting Man, St Thomas Aquinas, and St Francis of Assisi. But he is just as well known for his Father Brown detective stories. He has been criticised for some aspects of these tales, but there is no doubt of their on-going popularity, and some of these stories are quite excellent. To an almost equal extent, he is remembered for his novels and poetry, although I must confess, I think that novel-writing and poetry were his weakest suit.

Chesterton wrote in many other genres, but perhaps the most important observation one can make about his writing is that Chesterton was always trying to influence his readers for the better, and especially, to point them towards the highest truth. What distinguished him from most other writers was that he both was a Christian, trying to persuade people of the truth of Christianity; and that he was able to relate all the issues of life to the highest principles. In a word, Chesterton was able to show how the most sublime manifests in and applies to even the least sublime and the most apparently indifferent. I think that, to some extent, this is the basis of his paradox: he saw all creation as paradoxical in that creation appears to be separate from God but in fact it is not.

The other problem with how Chesterton wrote his articles is that he often had a rather complex way of writing, and adopted a tone of voice which was somewhat like talking down from on high. His tone was rarely quite natural. This is why Orage said that reading Chesterton is like trying to read by fireworks: the writing was so often explosive that the point disappeared. This is related to his irritating habit of writing a book or chapter with a particular title, e.g. “Walter Scott,” and then spending most of it talking about something, anything, except Walter Scott.

However, I would suggest that one of the main reasons that Chesterton’s reputation today is so mixed, is because he took no care to systematise his thought. The closest he came to that was probably in his Autobiography and in The Everlasting Man, but he was quite content to write many small books, and millions of articles, but not produce an overview of his thought. That is what Nichols has done, taking just Chesterton’s theological thought, not, for example, his social philosophy.

And this is a good place to mention that author. Fr Aidan Nichols O.P (1948- ) is a distinguished English academic. He held the first position for Catholic theology at the University of Oxford since the Reformation. He has had a distinguished career, although I cannot pretend that I have ever been so interested in what I have read of his work that I felt moved to explore it – until now. I must confess I have little desire to read his research on Bulgakov and von Balthasar, but I am wondering now if there might not be something worth considering in other of his books. The point is that Nichols has produced a first class work in this volume, and there may be reason to think he has produced other good material.

Just briefly, before I come to the review, the main drawback of this book, I suggest, is that it has no index. In the next part, I come to this book.