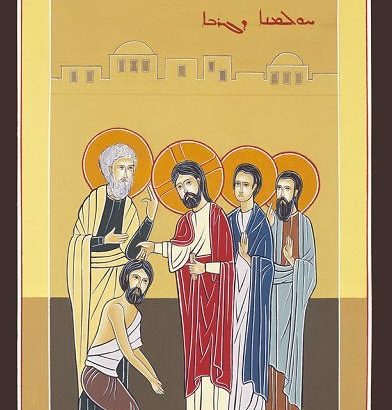 The Sunday of the Leper is the first full Sunday of Lent in the Maronite calendar. Fr Badwi states: “This icon of the Healing of the Leper, like the following icons of healing, is drawn on a luminous background that highlights the Holy City and its walls. The Lord, with some of His Apostles, among them St Peter, blesses the leper, who is kneeling in front of Him, and so heals and purifies him.” He then notes that he based the iconography on more ancient models. A comparison shows that it is very similar to Vat. Syr, 559f 62r, and takes the city motif from Medyat f.84v. I suspect that the luminous background came from the Vat. Syr. icon, which has a blazing red backdrop.

We see, from left to right, St Peter, the leper, the Lord, St John and St James. So, the first fact is that Our Lord is central. He is always central. Then, kneeling before Him is the leper, whose hands are on his knees, in submission and humility. Then, St Peter is on the extreme left, with his hand and finger pointing upwards in a manner reminiscent of how Leonardo da Vinci would paint figures with that finger witnessing to heaven. The apostle without a beard must be St John, and since the three who were often together with the Lord were Peter, James, and John, the third apostle will be St James.

In a masterful gesture, Ss James and John raise a hand in wonder: but the wonder is so subtly and mildly expressed it could be missed. It is a sense of being before a miracle which is so deep it does not take you out of yourself but rather brings you before the fact of its reality. If you think about it, the really astonishing moments of life do not make us go crazy (at least not at first). The first reaction is usually to be struck still, perhaps to open one’s eyes, or sit down, or, as with the apostles here, to raise a hand. We are in the presence of something stunning.

Now, let us consider the Gospel itself:

Now in the morning, having risen a long while before daylight, He went out and departed to a solitary place; and there He prayed. And Simon and those who were with Him searched for Him. When they found Him, they said to Him, “Everyone is looking for You.” But He said to them, “Let us go into the next towns, that I may preach there also, because for this purpose I have come forth.” And He was preaching in their synagogues throughout all Galilee, and casting out demons.

Now a leper came to Him, imploring Him, kneeling down to Him and saying to Him, “If You are willing, You can make me clean.” Then Jesus, moved with compassion, stretched out His hand and touched him, and said to him, “I am willing; be cleansed.” As soon as He had spoken, immediately the leprosy left him, and he was cleansed. And He strictly warned him and sent him away at once, and said to him, “See that you say nothing to anyone; but go your way, show yourself to the priest, and offer for your cleansing those things which Moses commanded, as a testimony to them.” (Mark 1:35-44)

The fact that this takes place in the countryside, outside of the city walls, is a reminder to us that this man was unclean. It is hard for us today to understand what this meant in ancient Israel. First, he could not be with other people because he was unclean; he was obliged to leave his home and be apart from others. When we speak of “countryside,” we should not think of the green fields which border the rivers of the Australian inland. The wilderness of Judah was and is hard and unforgiving, unless it is actually cultivated by someone.

We should not think of Our Lord as strolling around in pleasant landscapes and then being approached by a sick person. The appearance of a leper like this would have been, for ordinary people, a frightening matter. The Dictionary of Biblical Imagery by Ryken and others says that lepers were “the living dead,” and would “advertise their presence by wearing ragged clothing, looking unkempt and crying “Unclean, unclean.” (p.507) [The word “unkempt” was originally a variant of “uncombed” but is now a stronger word for a rougher appearance.] It was thought that only a prophet could heal leprosy (2 Kings 5:8) Since Jesus gave the apostles the power to heal lepers (Matthew 10:8) they must have stood at the level of prophets. This is why it was so important that the former leper not only be declared clean by the priests, but that he be a testimony to them. A testimony to what but that the Lord is among them?

Next, the leper was, as stated, unclean. This was not solely because of his condition in and of itself, and indeed, it is not clear exactly what the condition we now translate as “leprosy” was in Old Testament times. It was not just Hansen’s disease, but included skin eruptions, extreme psoriasis and fungal infections. This “leprosy” was often seen as resulting from the curse of God (Leviticus 14:34 and other places).

Not all sorts of uncleanness were equally serious, but this particular type of impurity was one of those which demanded both a moral and a ritual purification, and so was seen as related to something wrong and even sinful. Purity was required if God was to dwell with Israel. That is, uncleanness was inimical to holiness. It was, in short, a threat to good human life because it broke the connection with the divine. For that reason, uncleanness was treated with horror.

I have spent a thousand words and said little which could be called spiritual reflection. But I think the first need is to be able to imaginatively enter into the ancient Semitic world. To the extent that we can, we can share in the response of the apostles, as Fr Abdo Badwi so brilliantly presents them: Ss James and John are astonished, and St Peter points to heaven: for surely God is at work on earth.