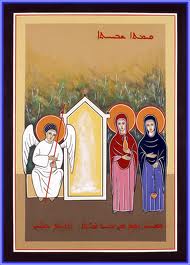 In the icon for Easter Sunday, we see the empty tomb in the middle left. It is presented as if it were a small house, topped with a red cross, and filled with yellow light. In the midst of that light, in hatched white lines, appears a form: possibly this represents the shroud cloths. To our left of the tomb is an angel: his right hand, although helping to hold his staff (which represents that he has travelled from heaven), also points to the tomb. He is saying: “Look and see that He is not here.” Two Marys are there with the oil and myrrh. Behind the tomb, there is new life: the trees are young and blooming.

I think that this question of life is one of the great mysteries of Easter. The Season of the Resurrection is, of course, the season of life – the renewal and change of life. It is the fulfilment of the stated purpose of the Lord’s mission on earth: “I have come so that (you) might have life and have it more abundantly.” (John 10:10) Let us look at this, it will start to make us wonder whether we really know what life is. Or to be more precise, we do not know all the life that God makes available to us: its full range and power. Life is a force which can not only keep us going, but lift us to unimagined heights, where a vivid sense of the presence of God brings that peace beyond understanding (Philippians 4:7).

This is the day in which the generations (3ōlme) that were worn out (dab.lee.w) were renewed,

and in the resurrection they came into existence after they had fallen.

It is the first day on which the creation took beginning,

and behold, again from it life began to be transmitted.

On this day the world began to be established,

and now behold, on it again it began to be renewed.

What it is saying is that the Resurrection is a new Creation. The world of the first creation had grown old and tired. It had become worn out. The word used is the same word used of wearing out clothes. For Maronites, this is a key point, because according to the Maronite Syriac teaching, Adam and Eve had been clothed in light when they were created. This was a reflection of antetype of the image of God, for God is light. When they sinned, they lost that light – that is how they knew that they were naked. Then, in baptism, that light is restored, but this time to the soul. I could quote the baptism rite, but it is very on almost every page. We pray, too, that, when the Christian dies,  Christ will be their garment of light (the garment of the wedding banquet in Matthew 22).

When St Jacob says that from the Resurrection life began to be transmitted, he does not refer to ordinary life – that, after all, had been ongoing. He means “eternal life,” that super-life. As stated, it is a life without suffering:

The resurrection of the Son is a new creation to the whole world,

and the world is new on account of it, and hence it is beyond sufferings (51-52).

St Jacob then comes to the clothing motif I have mentioned:

In the new world, no one arises with his clothes;

He has something else to put on for which he is worthy.

These are the garments of glory for the Resurrection, which are kept for it

The Resurrection should be for us an opportunity to enter more deeply into the mystery of life. We are surrounded it, but maybe we do not understand much more than the smallest and weakest part of it, that part which is subject to death.