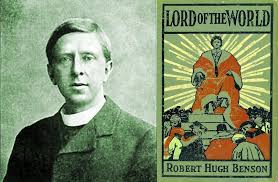 “The first General Assembly of the Reformed Church of Scotland met in 1560, shaped and inspired by the violent genius of John Knox, the apostate priest.” With this stirring and precise prose, Monsignor Benson opens chapter 1 of Part II of his Non-Catholic Denominations, titled “Presbyterianism.”

He then proceeds to a systematic account of Presbyterianism, its doctrines, and its ceremonies. In doing so, he also speaks of the Reformation in Scotland, and the various divisions of Presbyterianism. I doubt that one could tell that that part of the account had not been written by a Presbyterian. Turning to a description of its character, again, in his lean and vigorous style, he writes:

Its dogmatic system is a scheme of thought rising from, and supported by, the head rather than the heart. It is, like all systems that base their roots in Calvinism, severely logical and argumentative. The relations between God and the soul are legal in character, rather than filial. The system of salvation is represented in the older text-books, at least, as a strict covenant instituted between God and man, with conditions, grounds, qualifying clauses and even “legal fictions,” And although all this leads to what are called “filial” relations between God and man, although the New Covenant is wholly gratuitous on God s part, arising from His willingness to “impute” to His Son the sins of men who accept the Covenant; yet even those who accept it do so from the force of the Eternal Decrees rather than from that of grace acting upon a will that freely corresponds with it. There is a certain appearance of grudgingness and severe justice, even upon the face of God s mercy. (111)

The result of this, according to Benson is that it tends to make all its adherents “amateur theologians,” and to leave them “terribly open to the assaults of scrupulousness.” (111-112) It says that one is only saved if one has been elected, by God. This has the consequence that, should times of spiritual darkness come upon someone, then, in their depression they may come to fear that they are not among the elect. I recall, when I was much younger, reading an account of this in one of George Borrow’s books, probably Lavengro, and being unable to enter into the feelings of the Calvinist. I understood him much better after reading this. By the way, there is also an unforgettable account of an unbending and righteous Calvinist woman in Charles Dickens’ Little Dorritt. Benson goes on to explain how the Presbyterian tendency to doubt and despair is facilitated by its Calvinist approach to the sacraments:

There are no external acts of God through the sacramental system open for his consolation. (A Presbyterian) cannot, by a fervent and sincere confession, for example, met by the grace of absolution, cast himself once more upon the mercy of God, and satisfy himself that he is in the enjoyment of God s favour. (112)

Benson is quite fair to, even complimentary of the best of the Presbyterian spirit as producing:

… fine and self-controlled characters. Presbyterianism has a real dignity about it, owing to its realization of the Sovereign Majesty of God, the doctrine of which is so intimately connected with the foundations of the faith. It is, in this sense, a refreshing contrast to certain other Protestant schools of thought, in which a vague benevolence is substituted for the Love and Justice of God, and an incoherent Universalism for the Eternal decrees. A very real and solid piety therefore rising from this deep reverence towards the Creator as well as from an intimate personal relation with the Divine Redeemer is distinctly characteristic of Presbyterianism at its best. (113)

Yet, Presbyterianism has certain superstitions, especially Sunday observance, “which has been transferred, it would seem almost bodily from the worst days of the Pharisaic traditions of the Sabbath” (113). In an amusing but also accurate paradox, he find a superstitious devotion in the “endeavour to dispense, ritually, with ritual (114).” That is, they go so far out of their way to ensure there is no appearance of ritual that the very avoidance becomes an elaborate ritual.

In a prophetic passage, the fulfilment of which has led to Presbyterians splitting into the “Uniting” and the “Continuing Presbyterian” Churches, he writes:

to a very large extent, “liberalism” is at last beginning to prevail among Presbyterians … It concerns, firstly, the dogmatic ideas on which Presbyterianism was originally founded, modifying it now to such a degree that a practical Arminianism rather than a dogmatic Calvinism is the prevailing complexion of the thought of the younger men ; and secondly the whole subject of Biblical Criticism. The works of the various German schools are freely studied, and their conclusions taught ; and, unless the teachers can somehow manage to link themselves on to some living Christian tradition either to the Catholic tradition itself or to some new line of thought … it is difficult to see what authoritative Rule of Faith will ultimately remain as the foundation of belief. (114)

“Arminianism” was a protest against Calvinism, asserting that there is such a thing as human free will, and that God respects it.

How, then, can a Catholic best speak to Presbyterians? Benson’s touching thought was that they might be open to the Catholic approach to Scripture, little realising that the liberal attitude would not only overcome the Presbyterians, but also the Catholics. The other area where Presbyterians and Catholics have since come together, is in the doctrines around the issue of “Justification by Faith.” Here, Benson realised that in fact, not in doctrine, they were almost the same: “while technically and dogmatically heretical, (the Presbyterian) yet is apt practically so to regard works as the necessary accompaniment of saving faith as very nearly to satisfy the Catholic dogma.” (116)

However, there are significant differences as to the very idea of a Church: “For him, as for the Anglican Low Churchman, the “Church” is the result of the incorporation of individuals, rather than the Mother of whom souls are born, and to whom they look for light and grace.” (116-117) Further, true Presbyterianism is well-thought out. It is “very far removed indeed from the loose and incoherent systems of more modern days, and it produces admirable results, so far as it goes, of conscientiousness and solid piety.” (117)

It was pleasant for Benson to reflect that the anti-Catholic bias, even violence of language, was “beginning to dissolve.” My understanding is that, where it does survive, this prejudice is more likely to be found in the Continuing Presbyterian Church. I rather think that the learned Monsignor would find the Uniting Church to be well-intentioned, but doctrinally incoherent, and hence having little purpose, other than sentimental ones, for its independent existence.