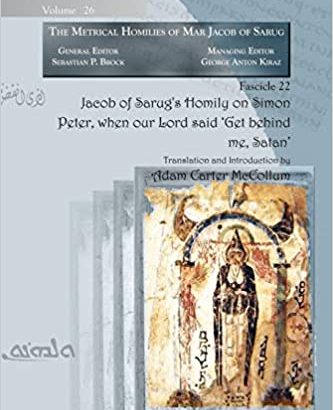 Jacob of Sarug’s Homily on Simon Peter, when Our Lord said ‘Get behind Me, Satan.’ ed. Adam Carter McCollum, Gorgias Press

The title of this work is the Homily on Simon Peter, when Our Lord said ‘Get behind Me, Satan’.  I think that reading this sermon, more than my reading of any other, has shown me that Jacob and the ancient Syriac writers were expressing in poetry and in biblical images what we would today say in a prose narrative, part doctrine, part moral exhortation. The basis of Jacob’s story is Matthew 16:23, but let us place that verse in its context:

From that time Jesus began to show to His disciples that He must go to Jerusalem, and suffer many things from the elders and chief priests and scribes, and be killed, and be raised the third day. Then Peter took Him aside and began to rebuke Him, saying, “Far be it from You, Lord; this shall not happen to You!” But He turned and said to Peter, “Get behind Me, Satan! You are an offense to Me, for you are not mindful of the things of God, but the things of men.”

Then Jesus said to His disciples, “If anyone desires to come after Me, let him deny himself, and take up his cross, and follow Me. For whoever desires to save his life will lose it, but whoever loses his life for My sake will find it. For what profit is it to a man if he gains the whole world, and loses his own soul? Or what will a man give in exchange for his soul? For the Son of Man will come in the glory of His Father with His angels, and then He will reward each according to his works.

The essence of what St Jacob says is this: that by wishing the Lord would not suffer and die, Simon Peter was wishing for something which would mean that the Lord would not triumph over suffering and death. That is, it seemed to be in the Lord’s best interests not to die, but in fact, His Passion and Death was the fulfilment of His very incarnation.

Now, what St Jacob is saying through this poetry, and by speaking solely about the Lord, St Peter, the devil, and the narrative of Matthew 16 is this: it is only by suffering and death that we come to the fulfilment of our own lives. Suffering is now an inescapable part of human reality, (perhaps even of cosmic reality), but it cannot be defeated by fleeing from it, it must be confronted head on. Hence I have set out the longer passage where the Lord tells us that to follow Him we must take up our own crosses as He has (i.e. to accept suffering and death). But not a word like that is found in the text. Yet, that is what the whole of the text is about. Jacob’s language is the language of biblical imagery, but we are so unused to it, possibly as a result of the “higher biblical criticism,” that we only see stories where Christians, for about one thousand five hundred years saw truths written into the biblical narrative itself.

This all relates to what I wrote last week about St Ephrem’s teaching that the Cross is the basic pattern of human existence: that is, like the Lord, our lives are potentially the taking of flesh, suffering in obedience to God and in submission to His will, and then rising in the Resurrection to join Him in the Beatific Vision. http://www.fryuhanna.com/2021/09/03/the-holy-cross-as-a-type/

All of these elements are in St Jacob’s poem, even the Beatific Vision is implied when it is said that, even while He was on earth, Our Lord was also with God the Father (line 56, the idea that He was in two places at once is found in the Maronite Eucharistic liturgy.)

This helps us to approach what, for us, looks odd: the descent of the Lord into Sheol to free those who died before the incarnation. It is mentioned in the Apostles’ Creed, but no one much takes it seriously today. However, Jacob here spends as much time on that theme as on any other. In the language of biblical imagery, it takes on a new meaning: it is the redemption of human history, of our past, as represented by the deceased. It is not a question of this meaning or of that, it has both meanings together: it is the historical redemption of all of time, and the historical redemption, in principle, of humanity.

I have elsewhere explained that, in typological terms, the Incarnation is the very centre of history. The descent into Sheol to rescue those who died before Him is therefore demanded by this, otherwise humanity would not be a shadow of the divine reality of the Incarnation.

This is shown by Jacob when he speaks about the Lord descending in order to redeem the divine image which had been defaced (again, a feature often found in our liturgy). Hence, he writes: “The image of the Father (Sal.meh da.bō) is swallowed up in mud. Look! I am going down to draw it up in person … If you tell me I should keep from enduring suffering, then the world must keep from living … Your thought is that I should stay out of Golgotha, and that the great image (Sal.mō ra.bō) should stay in Sheol without being renewed (net.Ha.dat). A little later, in lines 332-33, Jacob returns to this: the image is on a coin, but it has been distorted, and through His crucifixion He prepares a medicine for this corruption. (This is the basis of the prayer in the Anaphora of St John).

Further, in lines 106 and 109, Jacob refers to Simon’s learning the true name of the Lord (i.e. Messiah), and the beautiful name given to him (Kefa, “rock,” which is translated “Peter”). The name is important in Semitic thought because it represents the essence of the person named. It represents the essence because it differentiates this person from that person, and therefore marks our individuality. As we know from Genesis 1-3, creation involves separation and naming. Thus the practice of naming a person after a saint does not hinder or compromise their individuality: rather, it relates two individuals together in an association of aimed-for sanctity.

There are other details in this homily worth noting, but the important thing is the way of thinking. After years of reading Syriac literature, and engaging with it in the original language, it does, like a shy oyster, gradually open to reveal the pearl within. May St Jacob’s prayers be with us.