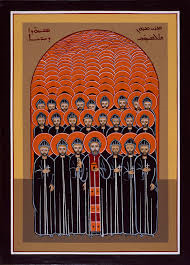 The Venerable Patriarch Douaihy, the “Memory of the Maronites”, accepted the historicity of the letters and the events described. The Maronite Church has long celebrated their feast on 31 July each year. It seems, then, a straightforward case of 350 monks murdered by people who were set on by the monks’ Monophysite opponents.

However, in The Maronites in History, Matti Moosa challenges the veracity of the attack and the authenticity of the letters. First, it is useful to understand Moosa’s agenda. On page 1 of his book, he declares that: “By faith, liturgy, rite, religious books, and heritage, the Maronites were of Syrian Orthodox (Jacobite) origin until the very end of the sixteenth century when they became ultramontane followers of the Catholic Church”. Given that Moosa cites the evidence that the Maronites were Catholic at the time of the Crusaders and even attended the Lateran Council of 1215 (see pp. 220-221), his thesis that no change came before the end of the sixteenth century cannot be maintained.

Further, Moosa’s argument turns on the idea that the Maronite practices and teachings which Rome corrected at the time of the Crusades were “identical to those of the Syrian Orthodox Church …” (p. 224) However, the doctrines and practices he refers to (e.g. the right of priests to administer chrismation, and the composition of the chrism) were the common heritage of Christians at the time of Chalcedon. Moosa has succeeded only in showing that the Maronites were an authentically Syriac and Antiochene Church – which we have always claimed.

To establish his thesis, he needs to prove that the Maronites had something distinctively Orthodox in their faith. He cannot do it. So he takes those elements they shared with the Syrian Orthodox from before the split in 451, and parades them to support the assertion that our: “… profession of the Chalcedonian faith was in appearance only, not a genuine adoption of that faith.” (p. 224)

Further evidence for the letters is found in the fact that two of the letters are in the collectio Avellana, which comprises documents written between 367 and 553 A.D. (see Cornelia Horn’s article). These are documents which, if not accepted, need to be explained. If they are not authentic, when were they produced? Who fabricated them and why? How were they included collectio Avellana?

Moosa’s arguments that there must be something unhistorical about the letter of the monks in 517  are not entirely, but chiefly:

2.         There is evidence, from a note condemning Severus, that Pope Hormisdas and the bishops did not know of the massacre (p. 55).

3.         Although the letter of 518 from the monks to their bishop was known to the Council, “it is indeed surprising that a document relating such a heinous crime did not receive thorough deliberation by the members of the council” (p. 55) This argument is repeated on p. 56 by referring to other letters of Pope Hormisdas.

5.         Some modern scholars do not mention it, and the only reason can be “that they must have considered it too vulnerable to merit attention” (pp.58-60)

In response, I reply:

1.         The records of the Council of Constantinople in 536 are known to be incomplete (as Moosa notes). This undoes his argument from silence). Even more directly, the evidence is that either that letter was read and accepted, or one quite similar was. What is certain is that there was read a complaint by monks that Severus and Peter “had maltreated and even killed many of them …” (Charles Joseph Hefele, A History of the Councils of the Church, vol. IV, T&T Clark, Edinburgh, 1895, p.200). So, either the letter of 517 or that of 518 or both were read, or something to the same effect was.

2.         This is simply wrong. The note in question does not say that they did not know. Once more, Moosa has raised an argument from silence. Who can speculate why it was not mentioned?

3.         We do not know that the letter did not receive “thorough deliberation by the members of the council”. The records are incomplete. The existence of the letter in 536 supports the traditional Maronite position. Why should the Council have considered the events of 19 years before? Doctrine was their agenda, not crime.

4.         It has never been maintained by anyone I know of that the Pope had assumed or accepted the titles in the monks’ letter: only that the monks called him by those titles. There was no book of protocol for the monks to consult.

5.         This is only a consideration, and in the end, is an appeal to authority: “These scholars seem not have accepted it”. So what? First, there is no evidence that they did not accept the account, only that they did not mention it. Once more, an argument from silence into which Moosa reads what he wants to find there. Second, even if these scholars had not been impressed by the evidence, they may have been wrong.

The very fact that Moose could launch such weak arguments is a sign that he is searching for grounds to support a belief he already holds. Moosa’s thesis has been considered, and dismissed, by one of the leading scholars of the area. Harald Suermann concluded that the documents were authentic. In Histoire des origins de l’Église Maronite, he notes, first, that Moosa is trying to establish that the monastery of Maroun was known before the later Monothelite controversy, and then goes on to lay out all of Moosa’s arguments (pp. 102-103). Suermann notes that Moosa points to a rule that monasteries be represented by bishops or abbots, and so representation by Paul the Deacon shows the letter with his name must be fraudulent. But, Suermann replies, this proves the letter’s authenticity, because at this time there were monasteries without priests (pp. 103-104). Once more, Moosa is writing back his expectations into the ancient world. Suermann’s point is that a fraud would have done the same, and so made a tell-tale mistake.

When one sits back and looks at it, Moosa’s whole argument comes down to: “I can’t believe it, therefore I won’t believe it, and I will refuse to accept the only available evidence”.