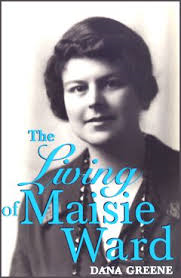 This anecdote about Walter Scott, otherwise unknown to me, is extracted from the writings of Mary Josephine “Maisie” Ward 1889-1975, who had the signal honour to be the great-great-granddaughter of the great Sir Walter. Scott’s granddaughter, Charlotte Harriet Jane Lockhart married James Hope-Scott, he converted to Catholicism, and so his granddaughter Maisie was a sterling Catholic, who married Frank Sheed, an Australian lawyer.

I found an extract from her book The English Way in the excellent volume Firmly I Believe and Truly: The Spiritual Tradition of Catholic England 1483-1999, compiled, edited and introduced by John Saward, John Morrill and Michael Tomko, Oxford University Press, Oxford, 2011

At page 641, speaking of the rosary as a help to concentration, she wrote: “Sir Walter Scott used to fell trees when he was writing a novel. It was the best way, he said, to get his plots and his characters to move and live; he compared it to a woman’s knitting … Without entirely understanding the relation between body and soul that causes this special connection between thought and some mechanical activity, we know that it exists.”

As if that was not enough, she continues: “Pascal put the matter rather oddly when speaking of using the rosary, taking holy water, etc. He said, Abétissez-vous, which has been translated (even more oddly) ‘stupefy yourself’. This, of course, is not what he meant, and he goes on to explain it better as ‘winning over the machine’, or the mechanical side of our nature, sot t it helps instead of hindering the direction the spirit desires to take. … Use the lower faculties as well as the higher. The world around is one huge distraction from prayer, the very holding, the very slipping through our fingers of the beads, can be a powerful counter-distraction – on a bus, in the subway, in the street, in a foxhole … the beads are there for the sake of the prayers … the prayers are there for the sake of the mysteries …”

The riddle is answered very well by Gurdjieff, and his theory of the different parts of mind and the different “selves”. When Pascal says “stupefy oneself”, it is very good advice if taken to refer to that part of ourselves which lives in the lower part of our mind.

As Gurdjieff taught, and countless people have verified by using his methods, when I divide my attention between myself and the body, that very concentration of attention takes me to a higher part of myself, a part which sees rather than endlessly talking at my experience.

How curious that this anecdote from Scott should be related to the rosary by one of his descendants. She did him proud.

I have left in many of her comments about the rosary, so sound are they.