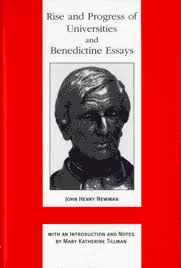 Chapter VII of Newman’s Rise and Progress of Universities is titled “Athenian Schools: Influence.” This entire post is devoted to it, because Newman makes the invaluable point that we need virtue and conscience – without them, we lose everything, even our own practical advantage.

Newman opens by saying: “Taking Influence and Law to be the two great principles of Government, it is plain that historically speaking, Influence comes first, and then Law” (77). By “influence”, here, he seems to mean personal prestige and achievement, for these lead to a man’s having influence over others, what we might call “charisma”. He gives the example of someone who had a reputation for justice, and used that name to found his political power.  Universities, he says, are similar: the personal labours of a great teacher cannot outlive him. But if an institution is founded, then his influence will continue. Thus, Newman states: “Zeal began, power and wisdom completed …” (78)

Newman does not state it, but I think his concern is this: if universities devoted to learning, knowledge and understanding are founded as a result of charisma, will they always be vehicles for this personal influence, or can other influences flow into the university, and if so, which? Newman is now proceeding to say that there other influences, some of them good, some of them bad.

The first influence he consider is “conscience”, which he describes as “the guide of life, implanted in our nature, discriminating right from wrong, and investing right with authority and sway …” (79) He treats conscience as natural, I assume, because it is implanted in our natures. Revelation, on the other hand, is given to us, and “Nature warrants without anticipating the Supernatural, and the Supernatural completes without superseding Nature” (79). This means, I think, that our conscience approves as true what is supernaturally revealed to us in Christianity. That is, our conscience tells us that Christianity is a guide to life, and speaks with “authority and sway”. Then, because conscience only goes so far, being a natural guide, Revelation provides us with a greater assurance and scope, while leaving conscience its place.

Now comes a first critical point, because Newman connects the existence of a good influence and bad influences (which are legalism, expediency and “beauty”). Man does not, says Newman, appreciate having within his breast so pitiless a judge as conscience, and so he seeks some substitute for it, and he often finds this in the Law of the State (79). This is very true: we often allow things which our consciences tell us are wrong, and give no thought to changing them, because they are the law of the land (one only has to think of the social teaching of the Church, and issues such as abortion). Newman acutely points out that because we are required, as Christians, to respect the law, this does not seem so wrong as it might. “The law says this – would you have me go against the law?” asks Newman’s weak man, and this is treated as “an unanswerable argument” (79).

The second bad influence is that we often substitute  for conscience whatever seems to us to be expedient (doing what is more politic, useful and less harmful than what is more just). And so, ignored in favour of whatever is practical, and earns us promotion, fame or pleasure: “Conscience is pronounced superannuated and retires on a pension …” (79).

“Beauty”, or what he calls “propriety” is the third bad influence with which we seek to replace conscience. What Newman means is that there is a common dodge that: “Conscience is found out to be … a fine taste, an exquisite sense of the decorous, the graceful and the appropriate …” (80). “Exquisite” means “of extreme beauty or delicacy”, and “decorous” means “not offending against decency or seemliness”.

So, do these qualities allow us to dispense with conscience, and just look to what is profitable or expedient and attractive? No, says Newman, because although conscience and the virtues it leads us towards are always profitable and attractive, it does not mean that all which has utility and beauty is good. He gives as an example, plague and armies. A plague can be considered useful, and an army is beautiful to look at it, yet they are not, in themselves good (80). Incidentally, Newman does not say what the value of a pestilence is, but perhaps he has in mind the plague which afflicted the Assyrian army, and so saved the Hebrews.

Relating this to the ancient Athenians, Newman states that while they had regard to law and expedience, they chose as their great influence “nothing short of a fine and delicate taste, a sense of honour, and an elevated, aspiring spirit” (80) I am not sure that a sense of honour and the spirit he describes have nothing to do with conscience and virtue, but this is Newman’s argument. Although Athens civilised Europe, he adds, we today would add in truth and the serviceable (the practically useful), as “the aim of the Academic intellect and the business of a University” (81). After an interesting discussion of the Athenian ideals, as he understood them, Newman comes to their deficiencies: “if beautifulness was all that was needed to make a thing right, then nothing graceful and pleasant could be wrong; and, since there is no abstract idea but admits of being embellished and dressed up, and made pleasant and graceful, it followed as a matter of course that any thing whatever is permissible. One sees at once, that, taking men as they are, the love of the Beautiful would be nothing short of the love of the Sensual; nor was the anticipation falsified by the event: for in Athens genius and voluptuousness ever went hand in hand …” (84-85)

This is so true as an abstract principle to need no comment. Newman then targets the fact that being loveable is not enough in this world; and to rule an empire such as the Athenians had, one also needs strength an ability to organise; and in the end, the Athenian system was “the action of personality” rather than of principle and system (85-88). The good points of the Athenian model are found, he says, in the Oratorian movement to which he belonged, founded by the attractive personality of St Philip Neri (88-89).

It is an interesting chapter. Some of the omissions are a little odd. One wonders, why did he not mention the cruelty of the Athenians in the ruling of their empire? I still recall my shock many years ago when the late Dr Jim O’Neil pointed out to me that the Athenians performed the Melian massacre, a horror which went beyond anything the Spartans had ever done. It was sobering, as I found the Athenians far more attractive than the Spartans. But he was quite correct. The great champions of democracy also denied life to non-Athenians when it suited their selfish purposes. And then there was the terrible example of the Sicilian invasion, an unprovoked incursion which led to the slaughter of many people on both sides, and all for the short-term gain of the Athenians. This is the point which Newman makes.