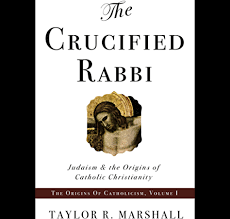 Taylor Marshall, The Crucified Rabbi: Judaism and the Origins of Catholic Christianity, St John Press, Dallas, 2009 (204 pp, plus appendix of Prophecies Fulfilled by the Lord, bibliography, and index)

This is the first volume of the trilogy, The Origins of Catholicism. It opens with quite a striking story, one leading to a revelation when a rabbi told Marshall: “We Jews believe that if someone is suffering and you invoke the name of his or her mother in prayer, God will be more merciful in granting your prayer for that person” (6). He understood, in a blinding flash, the religious cultural background to the Catholic devotion to Our Lady. Then, programmatically for the entire volume, he states that he converted to Catholicism when he realised that the Catholic Church alone could “trace her doctrine, liturgy, customs, and morality back to those Jewish beginnings …” (9)

Even a glance at this table of contents shows how fundamental these parallels are. This is not some flight of fancy drawing conclusions from remote and insignificant likenesses. The essence of Catholicism is found in the heart of Judaism. And all the difference was made by the historical event which is (from the typological perspective) the centre of history: the incarnation of the Lord.

It has often been pointed out that if one wishes to really understand something, it is best to begin with a study of its antecedents and origins. Then, having some idea of the world into which it entered, and how it came to appear, one can better understand the entire impulse of growth and maturity. There is no question, in my mind, but that Marshall here manages to achieve the double aim of his book quite nicely by proceeding in this manner for he shows both how Catholicism arose in accordance with the divine plan for human history, and the excellence of the traditional Catholic dispensation.

I would venture to say that “tradition” is one of the most important concepts in this book, and the author’s idea of tradition comes through all the more powerfully and convincingly because he demonstrates rather than stridently asserts it. Think of it like this: the continuity between Catholicism and Judaism is as grain to seed. This must be a providential arrangement. Just as the development of the plant follows a natural design, so too, we can infer, the growth of Catholicism from Judaism was in accordance with the divine plan. It often said that conservatives are shackled by their traditions. I have heard this from people impatient of their religious heritage, too confident of themselves to treat it with any respect, let alone reverence. But I do not think this is correct; I think it mistakes result for cause. Pondering Marshall’s thesis, it seems to me that, in religious matters at least, the traditionalist will be conservative, because he will value his tradition as a gift of astonishing good fortune, and will wish to preserve for posterity out of a sense of love for generations as yet unborn. In other words, it is not only, if at all, the conservative personality which leads to an appreciation of tradition. It is the other way around. The conservatism of traditionalists will be an intelligent and discriminating one. Incidentally, this ties in with some of Marshall’s other, more recent writings.

I cannot do justice to the book’s many sound insights in a one thousand word review. But I am impressed by the careful methodology of this book. For example, he points out that some matters, such as the Catholic use of vestments, do not stem directly from Judaism, but they do  reflect “the common religious presuppositions of Judaism and Catholicism,” i.e. that priests would wear ceremonial robes while performing sacrifice (13). The story of Rabbi Zolli’s conversion to Christianity (27-28) should be taught in every Catholic school. The understanding of Our Lady as gebirah (53-54), and Peter and the “popes” or “fathers” after him as the Royal Steward (55-56) are illuminating. Likewise, the explanation of the curse of the fig tree in Matthew 21 and Mark 11, is clarified by understanding its context in the Feast of Tabernacles (174-175).

The treatment of the mikvah (71-72) is excellent, although would it be improved by an understanding of typology. Marshall comes close to it on several occasions, e.g. when he speaks about the creation of the universe, and the Garden of Eden, as being like the laying out of a temple (127-130). In fact, the archetype is heaven itself, and the Garden: the universe and our churches and tabernacles are antetypes (see also 133 on the tearing of the veil, and 134 on the re-orientation of Christian churches).

Along the way, some sound apologetic points are made, e.g. about infant baptism (76); the mention of “flesh” seven times in John 6 (90) is the most solemn asseveration possible that the Bread of Life is the Body of the Lord; Judas is a “devil” and his being so is implicitly related to his rejection of the Bread of Life (91); celibacy was required of OT priests while serving in the temple, and the sacrifice of marriage actually highlights the value of matrimony (108-109). See too, his treatment of prayer, including prayer for the deceased (185).

Penultimately, as a priest, I trust I may be forgiven for pointing out that Marshall has some significant insights into the priesthood: they are entirely new, but they are often ignored. Marshall highlights them, and states them clearly and concisely. He points out, for example, that before the time of the revelation to Moses, the father of each family exercised the office of priest, and passed it on to his eldest son with a blessing (94). As he perspicuously concludes: “The father bore the spiritual authority of his family. The Catholic custom of calling priests “Father,” then, derives from this ancient and natural association between priestly mediation and natural fatherhood” (95).

Finally, I knew of this book a year before I purchased it. From the title, I thought it belonged to the genre “Jesus was really a Jew and did not intend to found a new religion, Christianity.” This idea has been around for a while, and is fatuous. Our Lord most definitely did intend to bring a new disposition, with new revelation (e.g. about Himself and the Holy Spirit), new teaching (as in the Sermon on the Mount), and to fulfil all the promise of Judaism.