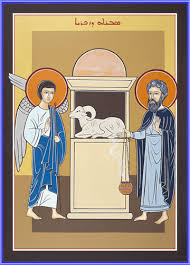 The Maronite Season of the Nativity or the Announcement, meaning the Announcement of the Birth of the Messiah, is a season of the miraculous. It is full of miracles, and we insist that the miracles of the season are to be understood literally, and not only as symbols. In the events we remember at this time, we see heaven putting forth its power and working wonders on the earth.

I would go so far as to say that if we do not acknowledge and celebrate the supernatural origin of Christianity, we cannot understand Christianity – rather, we remake it as a sort of human philosophy and ideology with some fetching stories attached. The feasts we celebrate on each Sunday in the Season are also observed on each day of the week which follows them. They are the spine of the season, the destinations of the Christmas journey. There are nine such feasts, two of which, Christmas and the Circumcision can fall on any day of the week, not necessarily Sunday.

The proper attitude for this Season is one of joyful anticipation, and then delight and gladness at the birth of the Lord. It is a time to recover within ourselves the purity and innocence of the infant we were once were. We cannot live that innocence all the rest of our lives, after all, we are no longer children and must put away childish things (1 Corinthians 13:11). But that is not all – we can still have the influence of that cleanness, and indeed we should, for Our Lord Himself told us that we must become like little children (Matthew 18:13, where Our Lord said in a literally translation: “Amen, I say to you, if you do not change and become like little children, you shall not enter into the Kingdom of the Heavens.”)

My conclusion from this is that the Season of the Nativity is the ideal time to take this teaching of the Lord seriously, by joining with all our mind and spirit into the birth of the Lord, and His purity, goodness, simplicity, and innocence. It is a time to put away sins and the sinning heart, and to change our mind from one which approves of, or contemplates with equanimity those ways of the world which are corrupt and contrary to His will and commandments.

Note, incidentally, that the Maronite feasts of this season are taken chiefly from the Gospel of St Luke, but also that of St Matthew. The genealogy (the family tree of those from whom the person born is descended, given as a continuous chain) of the Lord which is used is that of St Matthew. Further, if you read the two accounts of St Matthew and St Luke carefully, you will see how I, and an increasing number of people, believe that St Matthew used St Luke’s Gospel, and assumed a knowledge of it: to take just one instance, read chapter Matthew 1:18-25 and see if you can remove from your mind a knowledge of what St Luke had revealed about the Annunciation. It barely makes sense without the account in St Luke: it focusses only on what St Joseph knew, and tells us nothing of what Our Lady knew or had experienced, which is odd – unless you assume a knowledge of St Luke, in which case it all fits into place.

The Announcement to Zechariah

Consider the icon painted by Fr Badwi of USEK. It is closely based on the ancient icons in the Vatican Syrian and the British Library manuscripts, and the image in the Rabbula text. Fr Badwi wrote of this icon: “The elderly Zachariah carries his censer (thurible) and approaches the altar of the Lord, raising his left hand, astonished by the archangel Gabriel’s announcement. The cupola upon the altar … symbolizes the dome of the Temple and the celestial cupola.”

Next, the Archangel Gabriel appears as a young man, signifying his vigour and power. His youthful face, with no beard, taken together with the staff he bears in his left hand, shows that he is a messenger sent by one who has authority. The archangel is not speaking for himself. One eye, his right eye, is focussed directly ahead: it is transfixing us. The left eye, however, is turned upon Zechariah. The angel is including us in his message, the direction of which is shown with his right hand – the finger points to Zechariah. Like Zechariah, he is barefooted: for one must take off one’s shoes when one enters holy ground (Exodus 3:5 and Acts 7:33).

Observe that the right foot of the angel is raised, while the left is on the ground: he has arrived from the right hand side. Zechariah, on the other hand, has his left foot raised – the foot furthest from the angel. Zechariah is moving backwards in astonishment, shown by his left hand which is open in surprise. He is carrying the thurible because he is a priest offering incense, but the right hand with which he holds it is open: he is so startled he is in danger of dropping it.

This is typology: the lamb is not just a symbol of the Lord, the lamb IS the Lord, and it was the Lord both in the Old Testament, and in this icon, and in the Book of Revelation which teaches us about the consummation of all things. This also means that the Syriac artists, when they meditated on the announcement to Zechariah, found the Lord Himself present in the very midst of it.

In the Christian tradition, and not only the Syriac stream of it, Zechariah is seen to have gone astray because when the Archangel Gabriel appeared before him and declared that his wife would bear him a son, exactly what he had been praying to the Lord for (1:13), he reacted incredulously. Some people find it hard to see how his question was different from Our Lady’s, so I shall consider this. I have dealt with spiritual issues arising from the “Gospel of Zechariah” in another post.

Zechariah’s question was fundamentally different from Our Lady’s. The first difference, and I think it is the major difference, is that Our Lady had no reason whatsoever to expect that anything like the conception of the Lord would occur to her, whereas Zechariah had been petitioning the Lord just for this birth of a son. Also, Zechariah was already married, and must have been trying with his wife to have a child, hence his prayers to the Lord. Our Lady, on the other hand, had not yet married, and had not performed the marital act with her husband. Why would he pray for something which he doubted could happen? It means he was of two minds.

There is one other thing: the English translation (and, I must admit, the Syriac Peshitta, are not so good). In most English translations say that Zechariah simply asked “how will I know this?” (Luke 1:18). Then they use the very same words in Luke 1:34 to translate Our Lady’s question. The Syriac does the same. But in fact, the two questions are quite different in the original Greek. For Zechariah’s question, St Luke does not use the ordinary word for “how,” rather it uses a very unusual formation: kata ti, which is literally “according to what?” (A.T. Robertson, A Grammar of the Greek New Testament, 739) A person can quietly ask “how?” but to ask “according to what?” is quite different: it is an expostulation. In Luke 1:34, however, Our Lady does simply ask pōs, or “how?” So, if we pay attention to the original Greek text, we find much subtlety, and also consistency.