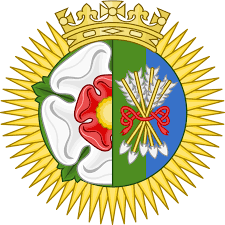 This much under-rated novel, was written just after The King’s Achievement. It is basically a novel of feeling, and especially of religious feeling. Yet, it has no romance, and the only mention of love is by the way, and decidedly secondary to the exploration of the spaces of the human heart – not only the dark and the deep, but also of the mysterious light-filled upper reaches. This is all brought to fulfilment at the end, when Queen Mary, after a hard and difficult life, finds her redemption. Even Martindale, who felt obliged to talk down Benson’s ability, conceded that the end of the novel is inspired. It is, but the ending could not have the glorious effect it does if the ground had not been carefully prepared [see the extraordinary passage “And were there not others here too?” which is resumed a few pages later: “Across it lay a light that was brightening with every word, from source that she could not understand” (125 and 128).] Further, there is a lot of other excellent material on the way, and it is marked by Benson’s characteristic wisdom.

The “Queen” in question is Queen Mary of England (1516-1558), daughter of King Henry VIII and Queen Catherine, known as Catherine of Aragon, but of course the rightful Queen of England. Why is the book so good? First, the story is simple and easy to follow; second, it is full of colour and interest. You know that it is heading to the death of the Queen, and to what will be the horrendous Elizabethan persecution of the Catholics, but all the time you are praying that the disaster can be averted. There is nothing forced or theatrical about it, yet you feel like a passenger on a plane which is falling from the sky in slow-motion, and that situation is, in itself, dramatic. So it has an element which could be described as “gripping,” not so much because of its story as because of its theme.

But above all, this is, I think, an example of that rare phenomenon, an edifying book which is also good literature. No sermons are preached, no lessons are dwelt upon, but the message is well-delivered. The centre of the message comes in the centre of the book: “The Carthusians and the Franciscans too, the great abbots whose names were now again honoured, had suffered for allegiance to the Faith in which they had been brought up, and than which none other had been previously known in England …” (173). The truth, meaning the spiritual truth, is eternal. It cannot change. It does not change because of us, and so we should always serve the truth and acknowledge it.

In The Queen’s Tragedy, we see the story through two sets of eyes: her own, and those of Guy Manton, a young man who serves her highness. The tragedy in question is more than just her hard life. It is more that she was a good person who could not express her goodness, and was incapable of doing the good she wanted to do. She was a loving person who could not express her affection, and caused everyone to think she was cold and unfeeling. Manton thinks this of her, until he finally learns otherwise. And, in a brilliant way of telling the story, this is Guy Manton’s problem, too.

On one occasion, when Elizabeth has lied to Mary that she (Elizabeth) is a true Catholic, and has cried and kissed Mary’s hands in a dramatic display of emotion, Benson writes “… this sour woman longed so much for love! Even the simulation of it, if so fervent as this, was worth the having.” (240). And is that the story of so much of our lives? Being willing, even desperate to settle for the imitation of love? How many people have I known who shared the tragedy of mistaking emotionality for love. Someone describes Queen Mary, trying to maintain a false aloofness as “playing to herself now” (80).

Manton’s own revelation comes when a wise priest teaches him that he has “sinned against the light. God had endowed him with the jewel of sympathy, and he had mistaken its nature; or rather he had desired other virtues that were not within his reach, and for their sake had sacrificed what he already possessed.” (275) In a lesson which obviously has application as much to Queen Mary as to Manton, the priest told Manton that some people were born hard, but he was not one of them, and in trying to make himself one of them, he would ruin his good qualities. (276)

The sage priest appears towards the close of the novel. Manton is full of remorse because when Elizabeth promised him her favour if he would lie, he did not immediately reject the temptation. “… you speak as a fool.” said the priest. “When will souls learn that there is no sin in temptation, and that there can be no temptation without a lively image being presented to the mind? Have you not heard an hundred times that sin lies in the will, and not in the imagination?” (318)

The entire novel is, therefore, a study of human nature and emotion, trying to fit ourselves to positions we desire but which are not God’s will for us. But, especially from the spiritual passages beginning at p.125, resumed and transfigured at the end, it is a story of the presence of the divine here among the earthly, kept out only by our not corresponding to it [when Mary thanks the grace of God, a clergyman adds “And to your Grace’s correspondence with it,” (115).]

That really is the lesson, we have to learn how to correspond to God’s graces for us.

Note: The Wikpedia entry for Benson says this novel was published in 1907, but I am holding the beautiful hard cover with the badge of Queen Mary emblazoned in gold on the front, and it says 1906. (I wonder if it was released in the USA in 1907).