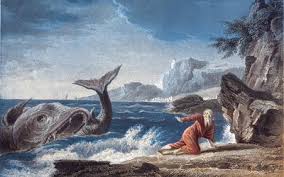 Jesus and Jonah: The Second Point of Contact (Calming the Storm)

Goppelt says of the story of how Jesus calmed the storm that: “The similarity in the descriptions of the external situations and the numerous verbal points of contact prove beyond a doubt that the evangelist had the story of Jonah in mind.” (72) However, while St Jerome sees the figure of Jonah and his situation as an antitype of the Lord, Goppelt will admit parallels, but not a type. In a footnote, where he quotes the Greek text, Goppelt notes these parallels:

Jonah 1:4-5 “The Lord, however, hurled a great wind upon the sea, and the storm was so great that the ship was about to break up. … Meanwhile, Jonah had gone down into the hold of the ship, and lay there fast asleep.” Mark 4:37 “A violent squall came up and waves were breaking over the boat, so that it was already filling up. Jesus was in the stern, asleep on a cushion …”

Jonah 1:6 “What are you doing asleep? … Perhaps this god will be mindful of us so that we will not perish.” Mark 4:38: “They woke him, and said to him: “Teacher, do you not care that we are perishing?”

Goppelt also compares Jonah 1:11 and 15 with Mark 4:39. But he does not think that this shows any more than that the evangelists knew the Book of Jonah. I wonder, however, if St Jerome was not correct. Many other writers have thought so: see for example https://byustudies.byu.edu/article/the-book-of-jonah-foreshadowings-of-jesus-as-the-christ/

I think the problem with Goppelt’s attitude is that he is looking for a thorough parallel between Jesus and Jonah. That is not how typology works: it is not a coded novel, or an allegory. Rather, the very imperfection of the parallel shows that we are looking at type and antitype because, remember, the antitype is an imperfect type. Jonah was asleep during the storm, and the sailors woke him to ask his god to save them. He had to be thrown overboard for that to happen: Jonah himself said that storm was due to his own sin. His sacrificing himself did the trick, and then, as we know, he was picked up by a whale and then thrown up on the land after three days. This is an antitype of Jesus precisely because Our Lord was asleep during the storm, the apostles woke Him to save them, and He did by His own authority. Both Jesus and Jonah were in the same situation: but there was a contrast in the result, precisely because Jesus was the true type (original), and Jonah the imperfect antitype (copy). Further, Jesus also saved the apostles’ souls when He rose from the dead, again, as the type of which Jonah was antitype. And that is our next point of contact.

Jesus and Jonah: The Third Point of Contact (The Three Days in the Tomb and the Resurrection)

In Matthew 16:4, Our Lord says: “An evil and unfaithful generation seeks a sign, but no sign will be given it except the sign of Jonah.” This points to His death, burial for three days, and His Resurrection. In Jonah 2: 1 we read that Jonah was in the belly of the fish for three days and three nights. In Matthew 12:38-40 it says:

Then some of the scribes and Pharisees said to him: “Teacher we wish to see a sign from you.” He said to them in reply: “An evil and unfaithful generation seeks a sign, but no sign will be given it except the sign of Jonah the prophet. Just as Jonah was in the belly of the whale three days and three nights, so will the Son of Man be in the heart of the earth three days and three nights.”

The importance of this is that God works in patterns: the fact that a template seen in sacred history is about to be lived out in Jerusalem, and more perfectly – not only alive in a whale but dead and in the tomb – points to the fact that, as Our Lord said, here is something greater than Jonah (Matthew 12:41 and Luke 11:32). It is not only a way of speaking, it is a way of seeing the hand of God in history. And as it is a type established in heaven, then it is available for us also, we too can be in the belly of the whale, and yet given life again.

Goppelt has a further interesting perspective: he wonders whether St Luke makes the typology not the death and resurrection, but the returning in judgment: “Just as Jonah became a sign to the Ninevites, so will the Son of Man be to this generation.” (Luke 11:30). He seems to think it does not, but I think that he once more confuses typology with other ways of thinking: first of all, he thought it was like allegory, and now he treats it as a mathematical logic: but an event or person, or any phenomenon, can exemplify or share in more than one type at the one time. Further, this apparent type relates to the first correspondence between Jesus and Jonah which was precisely the teaching of repentance.

In conclusion, I think that the work of the Lord is a type of Jonah in three ways:

These types are available for all of us, whether considering our own repentance, our own struggles with the storms of life and the passions, or meditating on our own deaths. Typology deepens our knowledge and understanding of Scripture, it helps us feel it more deeply, and apply it to ourselves.