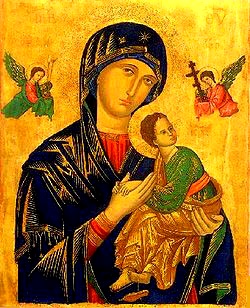 Let us take three meditations on motherhood. For the first of them, I invite you to think about your grandmothers, and what your grandmothers represented for you. The grandmother has a special gentleness with her grandchildren, she is always soft, always willing to listen. A good grandmother always receives her grandchildren, always sees them in the best light, and maybe for that reason, tends to bring out the best in her grandchildren. A grandmother is also a sign of tenderness, because she has tended to her own children, and now she is tending to her child’s children. She is not fearful, she has seen children grow up, and has a good idea of where and how things go right, and also where they go wrong. This presents us with the third aspect of her motherhood, wisdom. When we’re young, we tend to think that out mothers know everything, but the grandmother is even above our mothers in that respect. We know that our mother was once a child, as we then were, and that it was this old lady who had raised her, and taught her what she knew. So grandmothers represent a gentleness, a tenderness, and a wisdom, which children will naturally revere.

The second face of motherhood is shown to us by our own mothers. When we are infants, our mothers suckle us, they feed us, and so we always think of a mother as being someone who nourishes her children. As we grow older our mothers educate us, they prepare us for school, make sure we eat the right things, and so the mother is also someone concerned that we learn good habits, who trains us, who teaches us those little disciplines which help us be clean, tidy, and do the right thing. And then, as we grow older, and our relationships with or mothers become more sophisticated, and in particular if there is ever a time of need, then the reliability of the mother is a feature: the fact that the mother will be there, the fact that she is committed – all these things often come out very clearly.

So now we have two faces of motherhood, the grandmother and the mother. And these find their highest expression and their greatest perfection in the third face of motherhood I shall treat of today, which is the face of Our Lady. When we think of the Blessed Virgin, let us see the innocent and good young woman who said “yes” to God, and affirmed His plan. Let us ponder the great religious virtue, the obedience, the humility of this young woman, shown to the greatest degree possible for any human being. Let us ponder Our Lady in her fidelity to Our Lord and His mission. When He was teaching, surrounded by crowds, He had no rest, no comfort, she went to be with Him. She was ever true to Him, and stood by Him, at the foot of His cross. She endured the pain with Him, she felt it with Him, she was a symbol of that dauntless strength, that faith which nothing could put out, and that hope which guided her as a bright light.

Now, where does this leave us over the coming week? I don’t have to speak to you about affection for mothers, because that will come naturally. But there is one thing which may not come naturally, but which perhaps we will value more highly when we meditate on the three faces of motherhood which I have mentioned, and that is respect. As I say, love for mothers is natural, but respect is not natural, at least not to the same extent. Sometimes we have to remind ourselves of the value of respect. A very good practical reminder of respect is this: politeness. Try and be polite to the women in your life – all the women. Try that. Even if you’re a mother yourself, you’re not off the hook: you’re dealing with other women, you’re dealing with other mothers, you’re dealing with your own children.

The virtue of politeness is always relevant in our lives: we immediately know whether we are being polite or not. Now we might think we were justified, but we always know if we were not polite. Think about that, and then ask yourself, have I been respectful?

So, in this meditation we have discovered in motherhood these ideal virtues: gentleness, tenderness, wisdom, nourishing, educating, discipline, reliability, obedience and fidelity to God, humility, endurance, sympathy, compassion, and love. As a practical step, I think we can all learn to be polite, as a stage to being respectful. Being respectful is a stage to honouring and reverencing motherhood, because motherhood is not something which was created by mothers –  motherhood truly is the gift of God.