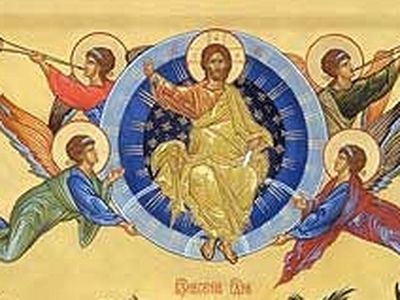 The Ascension (soolōqō) falls the fortieth day after Easter, and nine days before Pentecost each year. In his Homily on the Ascension of Our Lord, St Jacob of Sarug relates the Ascension to the entire mission of Our Lord, in both His divinity and His humanity, and hence to the entire economy of salvation. In this single homily of only 485 lines, Jacob shows how the ancient Semitic world saw the Lord’s work as involving a remaking and renewal of the entirety of the spiritual and the material worlds. In the Semitic world view, the spiritual realm is not only some sort of second act which follows the first act here on earth: it is an intrinsic part of what is happening here now.

St Jacob commences with what the editor calls a “Praise of the Living Harp and the Eloquent Strings.” It is a short but stirring evocation of the need to praise God, ending with these two lines:

My Lord, let me not be silent from Your praise not even when I am dead

I think that the Syriac of the last line is actually clearer. It literally reads: “For there is no death for he who lives in You because of You.” If I understand this correctly, it is saying that whoever lives in God cannot die because God Himself is undying. In other words, as the priest prays in each Divine Liturgy: “You have united … our mortality with your life.” But the idea that we should pray now that we may praise the Lord even when we are dead is quite striking: it means that we hope to adore Him when we are born into eternity. We do not think about this very much, but once one has grasped the thought, it presents us with a far wider perspective: it is as if the horizons of the world were suddenly raised onto a boundless sky.

The next section is called, again by the editor, “The Humility of the Unconfined and the Indestructible Word.” The opening is also powerful:

Wakeful is Your Word and the silence of Sheol will not make it sleep;

Let it [your Word] be spoken through me so that the coming generations will speak it. (lines 13-14)

Both this and the preceding lines are foreshadowing themes which will be developed in what follows. But now, Sheol is the realm of the dead as it was known in the time before the Resurrection, when, as is said, “the gates of heaven were closed.” Not much is said about this idea these days, but it is critical to the faith and especially to understanding the Semitic teachings which we shall explore in this homily. After the Fall of Adam and Eve, the doors of heaven were, so to speak, shut. Perhaps Enoch and Elijah were taken up, and we do not know who else God may have chosen, and we know little about the status of human souls in hell and purgatory in this period, but for the rest of humanity, there was a period of waiting in the realm of Sheol. This is why there are so few references to the souls of the holy and righteous entering heaven until the very latest phase of the Old Testament revelation, when God was gradually preparing people for the coming of the Lord Jesus. I particular draw your attention now to Jacob’s saying that he asks God to allow His Word speak through him (Jacob), so that the future generations may hear it. This ties in with the great commission which the Risen Lord gave to His disciples to spread the Gospel: Jacob is saying that it continues with us today.

St Jacob gives a memorable statement of the Semitic belief about the Second Person of the Most Blessed Trinity at the time of the Incarnation:

You remained upon the throne (of heaven) but the womb of Mary was filled by you.

In heaven is Your dwelling but on earth is Your birth. (lines 19-20)

The Syriac literally has “on high (brawmō)” is Your dwelling and “within the depths (bgaw 3oomqō)” Your birth (yeeleedootōK). This is entirely consistent with our creed, which says that Jesus was “begotton but not made.” This memorable picture of the Lord in two places at once is a very simple but, I suggest, highly effective way of teaching Christology. In fact, I prefer these two lines to most of the books on the subject. However, I am not keen on the translation. To contrast “heaven” and “earth,” is to speak of two different worlds. On the other hand, to picture “on high” and “within the depths” is to paint one cosmos, connected over a vertical range. I think it is a significant difference, at least in emphasis: the way St Jacob wrote points us to the matter I raised above: that the spiritual world is present among us even though we cannot see it. This is central to what Jacob says about the meaning of the Ascension, that:

In the Son of God, heaven and earth were joined each (to the) other;

The word which the editor has translated “joined” is HlaT, which can mean “join,” but is actually the Syriac equivalent of the Arabic iKluT, meaning “to mix, to mingle.” So it is not joining to two things which are separate like stitching a badge onto a jacket, it is more like the mixing of the water and the wine in the Divine Sacrifice.

Returning to the second section, the wonders of the Incarnation are dealt with at some length (e.g. “[The] sea [fits in and] is the hollow of your hand … Your power is everywhere, but your glory is wrapped in swaddling clothes.” (lines 23-24).

We have ended part one of this piece, and we are still on the second page of the homily. But it is, I think, worthwhile to take our time over this, because our better understanding of the Ascension will greatly increase our knowledge of the faith.