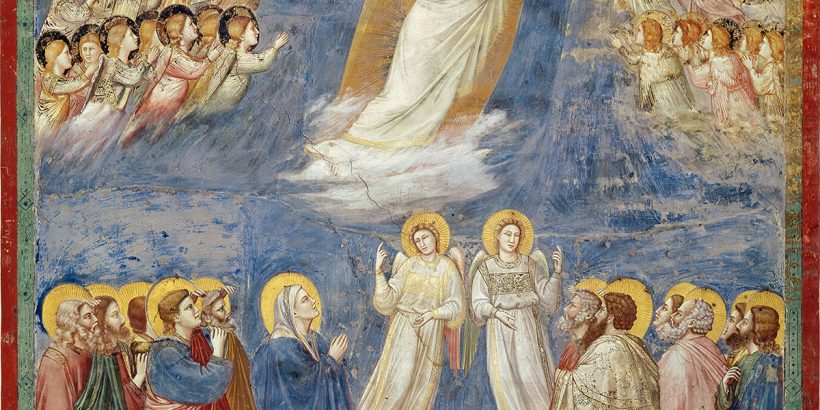 The Ascension of the Lord

Introit Men of Galilee, why do you wonder, looking up to heaven? alleluia: He shall so come as you have seen him going up into heaven. Alleluia, alleluia, alleluia (Acts I:11), Clap your hands, all you nations; shout unto God with the voice of joy. (Ps. 46:2) Glory be to the Father, etc.

The Collect    Grant, we beseech You, Almighty God, that we who believe Your only‑begotten Son, our Redeemer, to have this day ascended into the heavens, may ourselves also in, mind dwell amid heavenly things. Through the same …

The Lesson (Acts 1:1-11) The former treatise I made, Theophilus, of all things which Jesus began to do and to teach, until the day on which, giving commandments by the Holy Ghost to the apostles, whom he had chosen, he was taken up: to whom also he showed himself alive after his passion, by many proofs, for forty days appearing to them, and speaking of the kingdom of God. And eating together with them, he commanded them that they should not depart from Jerusalem, but should wait for the promise of the Father, which you have heard by my mouth: for John indeed baptized with water, but you shall be baptized with the Holy Ghost, not many days hence. They, therefore, who were come together, asked him, saying: “Lord, will you at this time restore the kingdom to Israel?” But he said to them: “It is not for you to know the times or moments which the Father has put in his own power; but you shall receive the power of the Holy Ghost coming upon you, and you shall be witnesses to me in Jerusalem and in all Judea, and Samaria, and even to the uttermost part of the earth.” And when he had said these things, while they looked on, he was raised up; and a cloud received him out of their sight. While they were beholding him going up to heaven, behold, two men stood by them in white garments, who also said: “Men of Galilee, why stand yon looking up to heaven? This Jesus who is taken up from you into heaven, shall so come, as you have seen him going into heaven.”

Alleluia   God has gone up with jubilation; the Lord with the sound of the trumpet. Alleluia. The Lord on Sinai the holy place, ascending on high, has led captivity captive. Alleluia.

The Gospel (Mark 16:14-20) At that time, Jesus appeared to the eleven as they were at table: and He upbraided them with their incredulity and hardness of heart, because they did not believe them who had seen Him after He was risen again. He said to them: “Go into the whole world, and preach the gospel to every creature. He that believeth and is baptized shall be saved: but he that believeth not shall be condemned. These signs shall follow them that believe. In my name they shall cast out devils: they shall speak with new tongues; they shall take up serpents: and if they shall drink any deadly thing,  it shall not hurt them: they shall lay their hands upon the sick; and they shall recover.” The Lord Jesus after he had spoken to them, was taken up into heaven, and sits on the right hand of God. They going forth preached everywhere, the Lord working as well, and confirming the word with signs that followed.

Offertory God is ascended with jubilee; the Lord with the sound of a trumpet, alleluia.

The Secret      Accept Lord, the gifts we offer you for the glorious Ascension of Your Son, and graciously grant that we may be freed from present dangers and reach life everlasting. Through the same …

Communion   Sing to the Lord, who has gone up to the highest heaven, over against the dawn, alleluia.

Postcommunion         Grant, we beseech Thee, almighty and merciful God, that what we have received in this visible sacrament may profit us by its invisible working. Through our Lord, Jesus Christ …

The Ascension falls the fortieth day after Easter, and nine days before Pentecost each year. In his Homily on the Ascension of Our Lord, St Jacob of Sarug relates the Ascension to the entire mission of Our Lord, in both His divinity and His humanity, and hence to the entire economy of salvation. The ancient Semitic world saw the Lord’s work as involving a remaking and renewal of the entirety of the spiritual and the material worlds. The spiritual realm is not only some sort of second act which follows the first act here on earth: it is an intrinsic part of what is happening here now.

We must remember that before the salvific work of the Lord, those who died went to wait in Sheol (the realm of the dead) as it was known in the time. It is said that at that time “the gates of heaven were closed.” That is, after the Fall of Adam and Eve, the doors of heaven were, so to speak, shut. Perhaps Enoch and Elijah were taken up, and we do not know who else God may have chosen, and we know little about the status of human souls in hell and purgatory in this period, but for the rest of humanity, there was a period of waiting in the realm of Sheol. This is why there are so few references to the souls of the holy and righteous entering heaven until the very latest phase of the Old Testament revelation, when God was gradually preparing people for the coming of the Lord Jesus.

When Our Lord died on the Cross, He then descended into hell, meaning by that, into Sheol, and probably not including the fiery furnace where the accursed demons and the damned suffer. There is a very significant body of ancient speculation about how Our Lord taught not only here on earth, but also in spiritual and invisible realms. The point is that all this was part of His salvific work, and when the time came for Him to leave this planet for ever, He ascended into heaven, and nine days later, the Holy Ghost, the Paraclete, descended upon the heads of Our Lady and the apostles.

If the Ascension therefore marks the end of one phase of salvation history, still it inaugurates another one, when the apostles are given the task of spreading the faith. This is the age of history in which we live. This great feast is therefore a sort of crossroads, and we are privileged to know of the road which God has laid out for us. Thus, both today’s Lesson and its Gospel teach the same doctrine: in the Lesson from the Book of Acts that “you shall be witnesses to me in Jerusalem and in all Judea, and Samaria, and even to the uttermost part of the earth,” and in the Gospel of St Mark that: “Go into the whole world, and preach the gospel to every creature.” It is unusual for the two main readings of the Mass to so precisely coincide. The balance of the propers are devoted to the joy we must feel when we contemplate the Ascension of the Lord.

This is another important aspect of this great feast: that because He has ascended on high, He can take us with Him as well. In fact, so powerful an impact did the Ascension make on the imaginations of the Apostles, that for some time it was said that He would return the way He had gone, with the angels beside Him. And this may well be true. The thing is that something which is really unimaginable was conceived in terms of the Ascension.