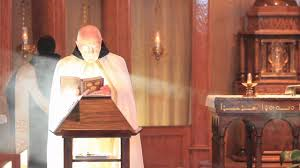 Part One: Visiting the Monks

I recently had the great good fortune, even the privilege, of visiting the Maronite Monks of Adoration at their Monastery of the Holy Trinity. If you have not heard of them, their web site is here: http://maronitemonks.org

By the grace of God, we now have two orders of Maronite Monks in the USA, using English not Arabic as their secondary vernacular liturgical tongue (Syriac being the prime language, even if it appears in the liturgy less often than the secondary one). The Maronite Monks of Adoration are on the East coast of the USA, in Petersham, Massachusetts. They should not be confused with the Maronite Monks of Jesus, Mary and Joseph on the West coast. This is their web site: http://maronitemonastery.org/ I have in principle approval from Fr Dekker, their abbot, to visit them in June 2016.

I had been visiting Mother Marla and the Servants of Christ the Light at their convent, a spiritual oasis, in Dartmouth, Massachusetts, whom you can find at this web site: http://maroniteservants.org/cms/  I twice had the privilege (again that word) of celebrating the Mass for the good Sisters. Like the monks, they use English as their secondary vernacular liturgical language. I think that in countries like the USA and Australia where this is the official language, there is a great need for places where English is exclusively used rather than Arabic, because, given the chance, priests born in Lebanon will very often use more Arabic, and then those who cannot understand will, quite often, give up on attending.

When one arrives at Most Holy Trinity, the peace and beauty of the countryside is the first impression. But when one enters the chapel, even the graceful environment takes its place, and that is second place. The supernatural awe which surrounds the Holy Sacrament in the Church displaces even the memory of the natural surroundings. God’s majesty, beauty and goodness do shine through nature, but not with the directness which He manifests in the Blessed Sacrament housed within a well built church, that is, within a traditionally built church. Besides, in nature, much occurs to distract. The world is a huge field of possibilities: almost anything can happen. But a church is an intentionally fashioned microcosm in which possible occurrences are limited by its very nature. If people respect a church, and do not speak within it except when absolutely necessary, and then for the least possible amount of time, and in the lowest possible voices, and do nothing to attract attention to themselves, the church can operate as it is intended: as a collector and intensifier of religious feeling.

My own firm belief is that we do not realise how much we lost when we departed from the traditional (let us say the pre-1900) style of building churches. Let us take but one example: the removal of altar rails from the churches and cathedrals. No, the Maronite Monks of Adoration do not have altar rails, but rather they separate the choir (where the monks pray) from the nave (where the people pray). And since the sacristy, with the altar and tabernacle, stand within the choir, then the purpose of altar rails in marking the difference between the sacred world and the secular, is fully achieved.

At the Monastery of the Holy Trinity, the sense of sacred otherness is augmented by the lighting in the monastery, which is darker than the world outside. I recall quite well how once, when leaving a church in Lebanon, my eyes had to readjust to the brightness of the world. I thought to myself that this was right: the light of heaven is not the light of earth. The old churches in Lebanon exemplify traditional church architecture at its best, and in a future article, I intend to put forward reasons to say that the only criterion possible for arts in the church is that they are traditional.

To return to the monks. There are some nineteen monks in residence, although not all are priests. Most of them are not of Lebanese or even Middle Eastern background. Even the Abbot, Fr William Driscoll, is Irish-American.

It was a privilege to meet the Abbot, and to be with, and pray in company with such a man. He is alive, and it would not be right to write in a flattering manner, but I think that I can say that I believe that the work he is doing is productive of spiritual fruit: how else could his monastery have flourished? And what higher praise could I extend? Yet it is not flattery, for the emphasis in what I say is on the Gardener for whom he works, and the nature of the laws of His vineyard.

It was also good to meet the monks, and to be with them. There is a certain force of feeling which holds them together. I think that the spiritual unity of the inhabitants of any religious house is of the first importance. Indeed, it has been undervalued. The idea that one can work through difficulties is not always correct. Sometimes one must stop the turmoil by removing people, and then, if the people change, something new can be attempted. But there is never a guarantee of success, and stubbornly keeping people who are effectively enemies together simply because they should not be enemies, is madness.

A Monastery for Adoration

I had an enlightening discussion with one monk. I asked: “But surely you see parishioners at Sunday Mass?”

Then he explained to me that, cases of emergency apart, they try not to, and do not encourage Mass attendance (although they allow men to stay there and pray), because they are dedicated to adoration. That is their charism.

And that simple comment helped me to crystallise and clarify some thoughts which had long been in my mind.

These good monks are helping to redress the imbalance in the world between the external and internal lives, between the material and the spiritual, the active and the contemplative. This imbalance affects not only the faithful. A number of priests, and even many monks outside of monasteries such as Holy Trinity, are relentlessly tugged towards pastoral engagement. They find that the life of prayer and contemplation is correspondingly underemphasised. In itself, pastoral service of the Gospel is an extremely high priority. However, the contemplative life is higher, fulfilling a counsel of perfection, even if comparatively few are called to it. Without sufficient inward nourishment, the clerical life can suffer from a certain spiritual dryness.

But the Maronite Monastery of the Most Holy Trinity is dedicated to the contemplative life alone. It is be a house of prayer, contemplation and study.

The monks are ordinarily present, praying, contemplating and studying. Their stable presence there silently witnesses to the primacy of God, to the critical need for an internal spiritual life, and for all our activities, even our study, to be permeated with a supernatural purpose.

This is why they perform the sacraments, and do not ordinarily travel to perform home or hospital visits, or celebrate the sacraments at other churches.

It is not necessary that the mission ever be a large one. It is more important that it be deep, and that it invoke in the world a sense of the intensity and the reality of the divine ground of being.

This, surely, is the purpose which holds it together.