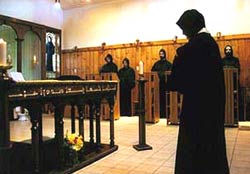 Who was St Maroun (St Maron)? St Maroun is an enigma. He is important in Christian history: no other Catholic rite is exclusively named after one person, yet little is known of what he said and did which made him so important – except for the essential points.

Maronite history is controversial. This controversy is not helped by the scarcity of sources for Maronite history from its beginning up until the last two hundred years. For the very earliest periods, the few shreds of surviving evidence are often unclear, incomplete, and vigorously disputed. If you want more details, consult the most important book on early Maronite history – Peter El Khouri’s Aramaic Catholicism. Incidentally, so that there is no confusion, I have altered all spellings of “Marun” or “Maron” to “Maroun”, whatever my source may have written.

We shall begin with the only biography of St Maroun, chapter 16 of Theodoret’s History of the Monks of Syria, on the holy hermits and monks of Syria. Theodoret was bishop of Cyr between about 423 and 458. Ancient Cyr, also known as Cyrrhus and Kurros, in Syria was founded in about 300BC. It was in northern Syria, not far from Aleppo and the modern Turkish border. Theodoret is uneven in his treatment of the monks. This is partly because he wanted his history to be personal: he aimed to relate what he had seen of these monks for himself, or learned from those who had themselves met the relevant monk. Unfortunately for us, it appears that Theodoret did not ever meet St Maroun, and perhaps for this reason, he wrote a very short chapter on him. It reads:

1          After Akepsimas, I will call to mind Maroun, for he adorned the godly troop of the holy ones. Maroun embraced life under the sky, taking for himself a certain hill-top which had long ago been honoured by the impious. And having dedicated to God the sacred precincts of the demons in that place, he passed all of his time there, pitching a small tent, but making little use of it. Maroun did not only employ the customary labours, but he conceived others also, gathering together the wealth of wisdom.

2          The judge measured out grace for these labours: so richly did the munificent one grant to him the charism of healing, that Maroun’s fame ran about everywhere, and everyone from everywhere was attracted, so that experience taught them the truth of the report. It was seen that fevers were quenched by the dew of his blessing, shudderings ceased, and demons fled – many and varied sufferings were cured by the one remedy. For the race of physicians applies to each illness the corresponding medicine, but the prayer of the holy ones is the common antidote to all pathologies.

3          But Maroun healed more than bodily weaknesses alone: he also applied the bountiful cure for souls. He heals the greed of this man, and the anger of that man. For one man, Maroun proffers the teaching which leads to self-control, while for another man he bestows lessons in justice; he tempers the man of intemperance, and arouses the sluggish. Farming in this wise, Maroun cultivated many crops through his wisdom: it was he who planted the paradise which now blooms in the land of Cyr (Kurros). The great Yakobos (James) was a product of this cultivation: of him and of all the others whom I shall recall individually with God’s help, one could rightly apply the famous prophetic saying: “The just man will flower like the palm tree, and will be multiplied like a cedar in the Lebanon.”

4          Caring in this way for the garden of God, doctoring to both souls and bodies alike, he patiently suffered but a short illness. Maroun, teaching us the frailty of our nature and strength in commitment, withdrew himself from this life.

In addition, Theodoret mentions Maroun in some other places, which I translate:

(summary)       2          Some Jews were journeying to a citadel which lay outside of our “inhabited world” (oikoumene). They lost their way in a storm, and came upon Symeon in his cave. Symeon offered them guides to put them back on the right road, and summoned two lions, who at Symeon’s direction, led the Jewish travellers back onto their road.

3     “But no one is to think the narrative is fabulous, for I have as witnesses to its truth, those who are usually foes of the truth. Indeed, the very Jews who met with this good service continued to praise this act. And this was told to me by great Yakub himself, who stated that he had been present when the Jewish travellers related the miracle to the divinely-voiced Maroun.” [Theodoret then stresses that this was an instance where Jews witnessed a miracle wrought through a Christian.]

(summary)       Yakub had been a companion of Maroun, who had lived in a place once holy to the pagans, and protected himself from the elements only by retiring to a tent made of “hairy skins” in rain or snow.

2     Limnaios had been a pupil of Thalassios, and then went to Maroun at the same time as Yakub, and after this, being eager for the “life under the sky”, took possession of another hilltop, lying above the village of Targalla.

2     Zebinas was admired by Maroun, who advised all who visited him to obtain Zebinas’ blessing. Maroun wished to be buried in Zebinas’ grave.

Chapter 30 mentions Maroun only to say that Domnina emulated his life. Price states that St Maroun professed himself “the disciple of Zebinas”. However, this is not what the text says. Incidentally, as we have seen, “Zebinas” was also the name of a bishop of Antioch. Evidently, the name was not unique among Christians.

It should not be forgotten that St Maroun lived before the great Christological battles which broke out. Disputes had begun, but not the great conflicts. The life of St Maroun was not the life of a controversialist: it was the life of a missionary of Christianity in a very disciplined form. Whether he was indeed the first hermit to live an open-air existence, as opposed to in a town, or in a desert cell, is not to my mind as important as the example of holiness. He was not so extreme as some others, as he had a small hut to which he could retire in extreme weather. That his way of life impressed contemporaries is not in doubt, and his exposure to the elements will have assisted in that. But that ascetic life was a means to an end: it is the end which is significant.

I have done research which suggests that he was up to one hundred years old when he died. One day I would like to have the chance to write it up for submission to an academic journal.