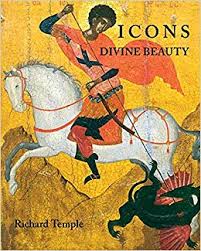 This is a very good book. It is most valuable of course, for the photographic reproductions of icons, but the text is also singularly helpful. Published in 2004 by SAQI, in association with the Temple Gallery, it is almost an illustrated history of icons. However, the text is kept tastefully discreet, allowing the focus to be on the icons themselves. Yet, the little that is said, is to the point, and gives this collection a spiritual dimension. In fact, if I were asked by someone to recommend spiritual reading, this volume would probably, at least right now, be in my top ten, topped only by books like the Way of a Pilgrim and the Philokalia. At the end of the volume is a useful taxonomy, I think I can call it that, of some major “icon themes”, e.g. the Annunciation, the Assembly of the Archangels, and “Blessed Silence.” Temple makes some interesting comments distinguishing icons from paintings atpp.53 and 71 – this book is quite accessible to beginners, but when the deep contents of the book are about the spiritual life, we are always beginning from new. I have read a number of books on icons, but Temple’s treatment is fresh.

I will take as one example of his treatment the 15th century of the Raising of Lazarus from Novgorod (figure 57, p.88). Temple says: “Here, behind the literal story, an elaborate spiritual commentary is developed from the gospel narrative. The terrible mysteries of life and death, and beyond those, of eternal life, are presented to us in colour and light. The light, as it is treated in this painting, can be understood not so much as rendering the visible world; rather, it is a celebration of the invisible world where pure light, symbolising spirit, is understood as emanation or vibration” (p.87). He continues to point out the pictorial focus, and the dramatic appearance of Lazarus, whose brilliant sheets stand out against the darkness of the cave.  Temple also notes where the light is and how it radiates. Subtly, he states: “Now a new focus attracts our interest: looking at the comparatively understated figure of Christ we notice that by his gesture towards Lazarus an invisible source of energy originates from him. Only after Lazarus receives this influence does the light, acting on matter, break up into its component elements and make the balance of tones that constitute the image. The light of Christ is unmanifest; only when touching the world does it become manifest” (p.92). I will repeat that: “The light of Christ is unmanifest; only when touching the world does it become manifest.” This has the corollary that we are needed to provide a reception point of appropriate sensitivity for the light of Christ to appear.

The way icons help us use a better quality of attention is noted. Speaking of icons of saints, in general, Temple writes: “In the first glance we take in the impression of the holy person; his total mass, his presence, is immediately there before us. Nothing distracts our eye: the plain gold background has no features; no sky or diminishing landscape to start a train of associations in our mind. We focus our interest on the figure, for he is all that stands between us and infinity; gradually, we find ourselves more directly under his gaze. The saint’s humanity, spirituality, wisdom and love are flowing naturally and ceaselessly towards us. Our attention is engaged” (pp.26-27). Along this line, note Temple’s concise but pregnant statements on Hesychasm and the Paleologan Renaissance (pp.42-49, I pointed to the importance of the Hesychast tradition for Gurdjieff in my book Gurdjieff: Mysticism …)

Of some considerable importance is Temple’s comments on form and contents: “The great strength of the icon painter’s conventionalism is that it guarantees the form. The content – the higher mystical gnosis – comes and goes according to laws beyond the ordinary mind’s capacity to understand; it belongs to a realm ‘beyond reason and beyond sense-perception’. But the contents can always be rediscovered lying forgotten within the form. If the form is destroyed then the hidden inner content is destroyed, and disappears forever. Form protects the tradition form falling  below a certain level … So the unbroken traditions of icon painting, themselves part of the unbroken traditions of Orthodoxy, are guardians of that spiritual dimension within ourselves without which human life has little meaning” (pp.153-154). The importance of form, geometric arrangement and mathematical proportion also appears on p.26, when he mentions “the very combination of naturalism and formalism that can call so compellingly on the attention of the onlooker.” Note how well Temple writes. Not a wasted word, not a single sound too heavy for the sentence.

Related to this are his comments on the spiritual hierarchy, for hierarchy is a particular form: “The Byzantines incorporated into their art an elaborate cosmological teaching that Christianity had inherited … (that) the universe consists of a hierarchy. At the highest level is God or the Absolute; below this is Creation or the realm of Manifestation consisting of the hierarchy of beings of different degrees of materiality. … all are progressively more material and less spiritual. Higher than human beings are angels, and above them archangels, against representing different levels of being – or levels of consciousness – and occupying higher or lower places in Creation” (p.50).

On several occasions, e.g. on pp.16 and 116, he draws attention to the calm untroubled gaze of some icons, and of the art which preceded them, preparing, as it were, for the coming into human history of the Christian icon. Incidentally, I was impressed by Temple’s understanding that ancient Semitic art made a contribution to this trail-blazing (p.19). I was also impressed by his awareness of the connection to the liturgy: the writer (which in the Orthodox tradition is the word used, rather than “artist”) of icons “is no more free to introduce novelties than the priest celebrating the liturgy” (p.27). And of course the artists were very often priests.

The book is recommended. I will close with this quote, which follows from the passage on the spiritual hierarchy: “According to some spiritual teachings this hierarchy is within ourselves and refers to different states of consciousness such as can be experienced, for example, by monks under the discipline of fasting, silence and meditation. The icon painter’s task, therefore, is to render something of these spiritual qualities in his painting. As in all art, if it is true within him, it will be true in his painting. And looking at the painting, we do not have to be art historians to sense this truth in ourselves” (p.51).